Veterans of Cincinnati: Best Bengals Players To Wear No. 71-80 In Franchise History

Share All sharing options for: Veterans of Cincinnati: Best Bengals Players To Wear No. 71-80 In Franchise History 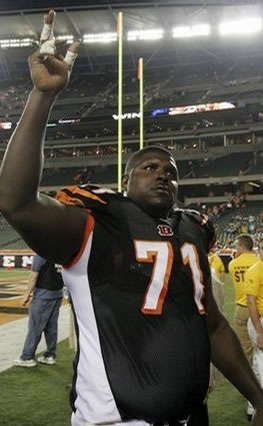 With a lockout expected to come to an end relatively soon, we thought now would be a good time to update our series of the best Bengals players to wear each uniform number in franchise history. Not like we haven't done that every Saturday. This week we hit the 70s, which means a core of legendary players like Willie Anderson, my absolute favorite Bengals player. Rich Braham and Levi Jones, two guys that helped make the 2005 offensive line become the best in the NFL. Anthony Munoz, often argued as the best left tackle in NFL history.

Let's not forget two defensive ends that sported numbers in the 70s; Eddie Edwards and Ross Browner, two of the team's best pass rusher in franchise history. Edwards (83.5) holds the franchise record for most quarterback sacks in a career while Ross Browner (59.0) ranks third. Edwards holds two of the top three best pass rushing seasons, posting 13 sacks in 1983 and 12 in 1980. Antwan Odom's five quarterback sacks against the Green Bay Packers in 2009, tied Edwards' record of five sacks against the Cleveland Browns in 1980. Edwards went to the Pro Bowl during the Bengals first Super Bowl season while Browner earned a spot on the NFL's All-Rookie team.

Here's our selections for best players to wear uniform numbers 71-80 in franchise history.