Poll: Best Bengals Player To Wear No. 82 In Franchise History

Share All sharing options for: Poll: Best Bengals Player To Wear No. 82 In Franchise History 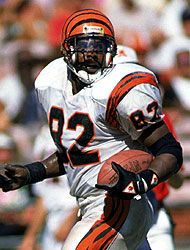 We're reaching a point in our survey of best players in franchise history to sport jersey numbers, in which several high-profile names with productive Bengals careers arrive. Case in point is No. 82. While these guys don't produce the best highlight films, they did contribute greatly to the Bengals during their time in Cincinnati.

Reggie Kelly, a blocker first and foremost, completed his seventh season with the Cincinnati Bengals last year. During his career in Cincinnati, Kelly has posted 125 receptions, 1,760 yards receiving and three touchdowns. While his receiving numbers are low, he gained plenty of esteem in the NFL as being one of, if not the most, productive blocking tight ends around the league.

Tony McGee spent most of his NFL career in Cincinnati, from 1993 through the 2001 season. During those nine seasons in which he started 134 games, McGee posted 322 receptions, 4,089 yards receiving and 21 touchdowns from a collection quarterbacks that weren't really that good -- except for maybe Jeff Blake (and Boomer's late 1997 run).

And finally, Rodney Holman. A three-time Pro Bowl player, a two-time First-Team All-Pro, Holman spent 11 seasons with the Bengals from 1982-1992, a period that produced some of the best offensive seasons in franchise history. Holman posted 318 receptions for 4,329 yards receiving and 31 touchdowns during his Cincinnati career, including a 13.6 yard/reception average. Holman was noted as a superb receiver and blocker,