Share All sharing options for: Poll: Best Bengals Player To Wear No. 67 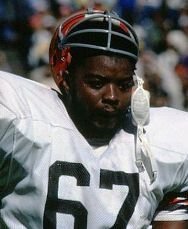 This is a painful one, but out of necessity. As we choose our best players to wear uniform numbers in franchise history, we come to No. 67. Let's relive the pain.

Kimo von Oelhoffen was drafted in the sixth round by the Cincinnati Bengals. During his six seasons in Cincinnati, Oelhoffen posted five quarterback sacks, a forced fumble and a recovery. Largely a backup defensive tackle with the Bengals, Oelhoffen began starting with the team in 1997, finishing second on the team with tackles amongst defensive linemen the following season.

Oelhoffen is best remembered in Cincinnati as "accidentally" crashing into Carson Palmer's knee during the Bengals second offensive play during the 2005 Wild Card game that tore up his knee. Many refer to this moment as Palmer's eventual degradation as one of the game's best quarterbacks to the average quarterback he is today.

Gary Burley played with the Bengals for eight seasons (1976-1983), participating in 105 games as a backup defensive linemen (only three starts), posting two quarterback sacks, four fumble recoveries and a safety. Burley also participated in Super Bowl XVI with the Bengals.