Veterans of Cincinnati: Best Bengals Players To Wear No. 81-90 In Franchise History

Share All sharing options for: Veterans of Cincinnati: Best Bengals Players To Wear No. 81-90 In Franchise History 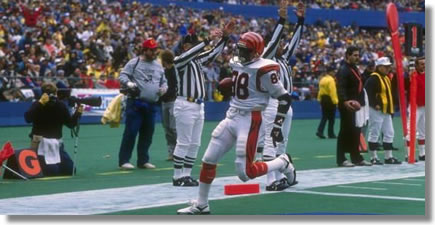 Mike Martin is a name that few might remember, yet his name is mentioned throughout one of Cincinnati's most successful decades in team history. From 1983 through the 1989 season, during his seven-year career with the Cincinnati Bengals, wide receiver Mike Martin became one of the franchise's top punt returners, returning a franchise-high 140 punts and 1,381 yards on punt returns, still holding onto the franchise of yards per return in a career (9.9) and only recently did Quan Cosby shatter his single-season record for most yards on punt returns. Martin played sparingly on offense, a role that's slightly increased from what we see of Cosby today, posting 67 career receptions for 1,017 yards receiving and six touchdowns.

Martin was one of several former Bengals, including Dave Lapham, Louis Breeden, Bob Trumpy and Solomon Wilcots that pleaded for Brown to hire a General Manager towards the end of the team's 2-14 2002 season. He wrote to Mike Brown, via the Cincinnati Enquirer:

If living with losing is OK, even if you are making money, I think you're in the wrong business.

Martin is our selection for best player to wear No. 88 in franchise history, a selection that was rather easy.

We ran three polls last week to fill out the rest of this week's roster. Overwhelmingly fans selected Rodney Holman over Reggie Kelly and Tony McGee. Chad Ochocinco won his poll for best player to wear No. 85 at a 61-38% ratio. In the closest poll last week, T.J. Houshmandzadeh beat Bob Trumpy by eight votes, scoring just over 50% of the vote.