Share All sharing options for: Poll: Best Bengals Player To Wear No. 91 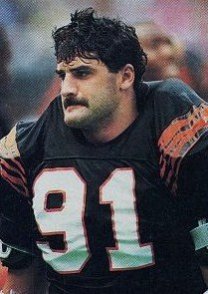 The final week approaches for our series of best Bengals players that wore each uniform number from 1-99. The first poll for this series is between two defensive players that sported the No. 91.

Bengals defensive end Robert Geathers, while obviously disappointing during recent seasons, has what you could constitute as a successful Bengals career. Noted mostly as one of the league's better defensive ends against the run earlier in his career, Geathers has posted 27.5 career quarterback sacks, two interceptions, six forced fumbles and a touchdown. His career-high 10.5 quarterback sacks in 2006 ranks as the franchise's fifth-best performance, behind names like Coy Bacon, Eddie Edwards and Reggie Williams.

Carl Zander, starting inside linebacker for the Cincinnati Bengals during Super Bowl XXIII, played six seasons with Bengals, who drafted him in the second round, 43rd overall. Starting 94 games with the Bengals, Zander posted eight quarterback sacks, three interceptions and seven fumble recoveries. We wish we could have established numbers for tackles, but since the NFL doesn't view tackles as an official statistic, finding those numbers for historical players is much harder.