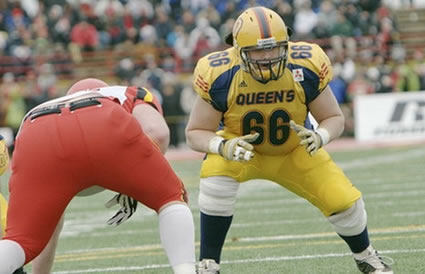 Matt O'Donnell, a 6-foot-10 340 pound offensive lineman, signed with the Cincinnati Bengals on Tuesday, according to the Canadian Press. Out of Queens University in Ontario, O'Donnell made his mark in college football, named to the First-Team All-Canadian team in both 2009 and 2010 with the Queen's Gaels. He also won the Ontario University Athletics conference award for best lineman in 2010.

O'Donnell was originally drafted by the Saskatchewan Roughriders of the CFL in the second round this year, but chose to pursue a career in the NBA after receiving a call from the Boston Celtics. All this despite not having played competitive basketball since his high school days.

O'Donnell may be a little raw, but it is a rare thing to find a man of his size with the type of athletic ability that he seems to possess. He may be destined to spend a couple years on the practice squad, but it will be interesting to see just how Bengals offensive line coach, Paul Alexander, plans to utilize his skills.