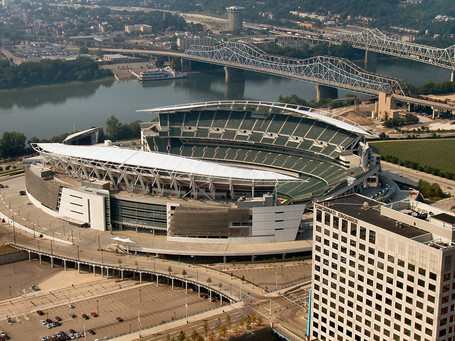 Dan Monk from the Biz Journal broke the story earlier this month that Hamilton County Commissioners were set to vote on a proposed $307,000 upgrade for Paul Brown Stadium's scoreboard, which included high-definition feeds. Several days later commissioners declined to vote, asking Hamilton County Prosecutor Joseph Deters if the scoreboard upgrade is actually required by the terms of the lease signed with the Bengals. Todd Portune remarked at the time that if the team wants a high-definition scoreboard, the team can buy it. So you can only imagine how Portune will answer when the vote comes up again.

According to Sharon Coolidge of the Cincinnati Enquirer, the Hamilton County Commission voted in favor of the scoreboard upgrade with a 2-1 vote. All three county commissioners claimed that they didn't like the vote, but feared that the Bengals would sue the county.

With the long history between the Bengals and the county, the economy, compounded by the county's exponentially reduced revenue from the state due to Governor John Kasich's government reform, the commissioners are looking at getting out of the lease or, at the very least, reforming it to substantially reduce county's responsibilities to Paul Brown Stadium.

Commissioner Todd Portune – the lone "no" vote against the video replay purchase – used the discussion to suggest the county stop making repairs and improvements to Paul Brown Stadium and that the county reform its lease with the Cincinnati Bengals.

Commissioner Chris Monzel, who said he only voted yes because of advice from county lawyers, agreed the idea of trying to get out of the lease was worth looking at.