Because a number of their recent high draft picks have failed to pan out (e.g., Chris Perry, David Pollack, Odell Thurman), and because owner/de facto GM Mike Brown refuses to make any splashy trades (Ochocinco to the Redksins in 2008) or spend the money on any big time free agents, to be competitive the Bengals have been compelled to squeeze value out of veteran players that other teams had given up on. And to their credit, they've done a remarkable job at it. Many of the key players in the Marvin Lewis era have been retreads and scrap heap reclamations that were recycled into serviceable-to-very-good players. For example:

But not every hand is played to perfection. Sometimes you fold a winner. With that in mind, we're going to take a look at the ones that got away, rolling out a list of the top five players that the Bengals gave up on and who subsequently have become serviceable-to-very-good players in other organizations. For the purpose of continuity, we'll stick to position players, otherwise the list would pretty much start and stop with former assistant coach Bill Walsh (who, not promoted by Bengal owner Paul Brown, went on to revolutionize football with his version of the West Coast Offense, guide the 49ers to three Super Bowl wins, and make the Hall of Fame) and former head coach Dick LeBeau (who has orchestrated the daunting Pittsburgh Steeler defenses since 2004).

Walter, an Eastern Michigan U product, was originally drafted in 2003 by the New York Giants in the seventh round (255 overall), but was released during training camp, with the Bengals then picking him up. In his first two seasons with the team, Walter was principally a special teams player and backup, collecting only 11 catches across that span. Walter, like current Bengal Jordan Shipley and Patriot Wes Welker, exuded all the proper diminutive, scrappy white guy receiving traits, but struggled to find playing time with bodies like Chad Johnson, T. J. Houshmandzadeh, Peter Warrick, and Chris Henry in front of him. 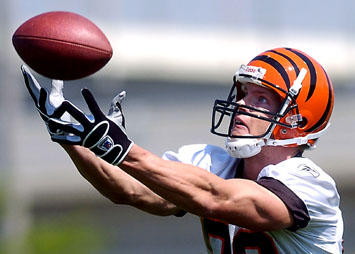 In 2005, he was able to crack the starting lineup for two games, finishing the season at 19 catches for 211 yards. During that offseason, Walter became a restricted free agent. The Bengals chose not to match the offer the Houston Texans extended to Walter, netting a seventh round pick in compensation (which the team used to select S Ethan Kilmer).The rationale at the time was as follows:

"Kevin has been a fine player for us, and he deserves the opportunity he'll get in Houston to be a starting receiver," Bengals head coach Marvin Lewis said. "But as we build our roster for the upcoming season, we believe it's in the best interest of our team to allocate these funds to another position."

Essentially, the Bengals elected save money and go with Kelly Washington over Walter (whoops) and add veteran depth with Antonio Chatman (and whoops), who went on to collect 3 catches for 22 yards in an injury-plagued season and not much more in two subsequently forgettable seasons, after which he mercifully vanished from Bengaldom.
Since signing with Houston, Walter has had two tilts against his former team. You might remember this game back on 26 October 2008, when the Texans laid into the Bengals 35-6. In it, Walter had 5 catches for 70 yards and 2 TDs, one of them being a 39 yarder that earned CB Jonathan Joseph a dunce cap and a seat in the corner when he failed to tackle Walter after a rolling grab, instead giving him the ol' two-hand touch, let's be friends move. At the time, Marvin Lewis had some flattering things to say about Walter, via some unflattering things about Joseph:

"It's as poor a play as you can have on an NFL field," Lewis said. "We know what kind of player Kevin Walter is. He'll fight you for everything you've got. And that's what you've got to be like. You've got to be more that way than the other way, in order to win and be productive in the NFL.

"It's a bad situation. A guy runs across the field who's not faster than you, and he catches the football on you. I'm already upset. But then don't let it get worse. Don't make a bad play worse."

So tell us how you really feel, Marvin. Gesh. But the vitriol must have had an effect, since in their next meeting with the Texans, on 18 October 2009, Joseph and Co. did a better job against Walter, who managed only 3 grabs for 29 yards. Unfortunately, the Bengals forgot to do anything about anyone else on the Houston handegg club and lost 28-17.

After that 2009 season, Walter become a free agent and, along with Baltimore and Kansas City, the Bengals were rumored to have interest. In an offseason where free agent receivers were over-valued by some teams, the Texans wound up re-signing Walter, who cashed in with a five year, $21.5 million deal. For his part, Walter was happy to stay with the up-and-coming Texans.

"I’m glad it worked out this way because this is where I wanted to be," Walter said. "We’re a team on the rise. I want to have a great year to help us get where we want to go. I really didn’t want to go anywhere else."

Texans Coach Gary Kubiak was pleased as well, knowing Walter would be around to take some pressure off Andre Johnson.

"You can’t have enough Kevin Walters on your team," Kubiak said. "He stands for everything we are. He’s a great kid, a hard worker, a player who does everything right on and off the field.

"It’s important that he’s back with us because he’s a big part of what we do."

Since Walter's departure, the Bengals have been trying to find receiver depth, signing guys like Chatman, Laveranues Coles, and (hate to bring it up, but) Antonio Bryant. Those dudes obviously didn't work out, but the issue with Walter was always matching price with need. Although he's flourished as the #2 receiver opposite the frighteningly good Johnson, Walter is really more of a slot receiver type, and at the time of his departure the team already had a better Kevin Walter in T. J. Houshmandzadeh. Sure, they could have signed him in 2010, but the cost was high for a player of his perceived caliber and they went with the more ostensibly game-changing Bryant instead. Fortunately, they ended up getting a potentially better Houshmandzadeh in Shipley. Then again, like Kubiak said, you can't have enough Kevin Walters on your team. I guess that's why we drafted Ryan Whalen this year.

An honorable mention here (if that can be a thing) is former Bengal Dez Briscoe. A sixth round pick last year, Briscoe was cut by the Bengals with the intention of moving him to the practice squad, but the Tampa Bay Buccaneers went batty and offered Briscoe a boatload more money, provoking more venom from Marvin Lewis. Briscoe went on to log six catches for 93 yards and a Touch with the Buccos. Let's just hope he doesn't end up going all Kevin Walter on us.