In the NFL, drafting a kicker is like buying a mattress. While you know it's necessary, you can't help but feel that it's an awful waste of money that could be more satisfyingly spent on a big ass TV or an autographed Joe Namath rookie card. But at least once you've made the sensible choice you can think, "alright, I don't have to worry about a mattress for another 8-10 years." Then again, you might find out that, despite all your time spent reading Consumer Reports and wandering around Sears, you still end up with a lousy bed that leaves you cramped and achy in the morning.

Which gets us to the No. 4 player on our list of top ex-Bengals:

In 2000, Rackers was supposed to be the Bengals' new mattress. He was drafted by the team in the sixth round as the 169th pick, one after the Saints selected Marc Bulger and eight before the Giants picked Dhani Jones (and 30 before the Patriots took a flyer on some bozo named Tom Brady -- it's never a productive exercise to look back at that stuff). This was the Bengal draft headlined by Peter Warrick and Mark Roman, another former Bengal who went on to have an OK career with Green Bay and San Francisco. Unfortunately, like those two, Rackers was pretty much a lemon during his time in Cincy.

In his rookie season he converted only 12 of 21 field goal attempts (57.1%), inauspiciously missing his first three attempts. Struggling with the poor playing surface of Paul Brown Stadium, those numbers didn't get any better in 2001, when he was 17 for 28 (60.7%) and missed a PAT. It began coming together a bit the following season though. Rackers connected on 15 of 18, his only misses being two 40-yarders and two 50-yarders. He nailed 12 of his final 13 attempts, the only miss a 52-yarder. But he had offseason surgery on his knee; then the Bengals gave him the axe during the 2003 preseason in their final roster cut. 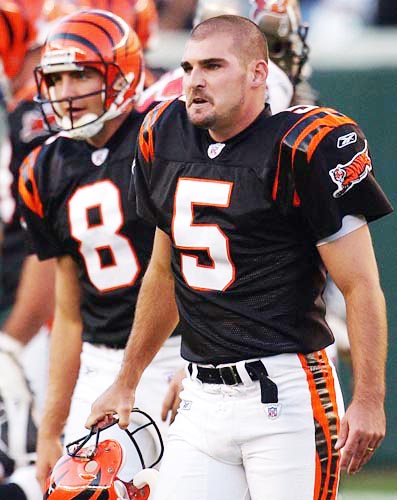 Rackers eventually found a home in the rarefied air of Arizona when the Cardinals, having terrible kicking problems, signed him in the middle of the 2003 season and he established himself as a legitimate kicking force in the league.

"In Cincinnati, I felt a lot of pressure [...] I felt that every game, every kick, my future depended on it."

Rackers' best season came in 2005. A perfect 26-26 start earned him a four-year contract extension, and despite battling through a partially torn calf muscle in his right leg, he hit 40 of 42 tries (leading the league in both categories) and all his PATs. Those 40 FGs remain an NFL single-season record. Rackers was chosen for the Pro Bowl, as well as being selected as a First-Team All-Pro.

While he lead the league in attempts again the following season, his accuracy took a nosedive -- going 28-37, then 21-30 (possibly due in part to a sports hernia he suffered that season) -- before a rebound in 2008, helping propel the Cards to the Super Bowl. It was also during this season that he was featured in one of the most hyperbolic plays in NFL history, the free-kick field goal:

Of course, the Bengals did just fine in the kicking department without Rackers, replacing him in 2003 with Shayne Graham, another great Bengal salvage job. Graham, having been released by the Saints, the Seahawks (twice), the Bills, and the Panthers, went on to set a number of franchise records with the team.

It's easy to compare the two since Rackers's seven seasons in Arizona parallel Graham's seven in Cincy. Here are their FG percentages during those seasons:

Over that span it's clear to see that, in terms of consistency, Graham was the better kicker, despite the fact that their average percentage across those seasons is fairly close:

Rackers was obviously up and down during his tenure with Arizona, while Graham was much more reliable. In fact, for his career, Graham ranks third all-time in field goal percentage at 85.9 (compared to Rackers's 79.4 career percentage). So no, the Bengals didn't suffer from the loss of Rackers.

But take a look at those last three seasons. While Graham's accuracy began trending downwards, Rackers was returning to his 2005 form. Although he missed two games with a groin injury, his 94.1% in 2009 was best in the NFL, helping propel the Cardinals to the divisional playoff game against the Saints (interestingly, while dealing with that injury Rackers was replaced for two games by...drumroll...Mike Nugent, the Jets 2005 mattress and current Bengal reclamation project). I bring that up to justify putting Rackers on this list at #4. In 2009, Graham lost his mojo in a bad way. Part of that was due to some terrible snaps from Brad St. Louis early on, but at the end of that season Graham was missing big kicks all on his own. Since he was allowed to depart as a free agent after that season, Graham has been cut by the Ravens and the Giants before logging a very serviceable cameo with the Patriots, while filling in for the injured Stephen Gostkowski. Graham is currently a free agent.

On the other hand, Rackers remains a very viable kicking option in the NFL. In 2010 he landed a two-year contract with the Texans. Beating out veteran Kris Brown in the preseason, he went on to post a 90.0% conversion percentage, good for fifth in the league. Rackers still maintains a strong leg too, nailing a 57-yarder, also good for fifth in 2010 (Graham's career long is 53). And that strong leg produces a lot of touchbacks. Between 2003-09, Arizona was in the top five in the league in touchbacks per game four times, with Rackers leading the league in 2004 and 2005. The Bengals best finish during that span was in 2006 when they were tied for fifth.

That's all to say, it was awesome having Graham for those seven (or 6 1/2) years, but it'd sure be nice to have Rackers now. He's still pretty good, while Clint Stitzer isn't, and I'm not sold on Mike Nugent the way the Bengals appear to be heading into this season. Obviously, the Bengals have passed up on Rackers more than once, letting him go in 2003 and not signing him in 2005 or 2010, so they must not be too interested in what he's selling. But as far as mattresses go, Rackers would give me a better night's sleep this year than Nugent, who only converted 78.9% of his kicks before blowing out his knee. If healthy, Nugent could be another fantastic scrap heap pick-up. He showed a strong leg last season, but as I've said before, reconstructive knee surgery for a kicker makes me uncomfortable. Then again, Rackers isn't the most steady guy in pressure situations (for example, shanking a 34-yarder in the fourth quarter of the 2009 wildcard playoff game against the Packers), so who knows. But he's got a hot wife named Rachel (Rackers) and he likes to mix it up when he's on the field (36 career tackles), so there's that.