Kelly Gregg reminds me a lot of Bengals OT Andrew Whitworth. Both are the epitome of underrated -- unspectacular, but solid and reliable players who anchor their lines. To be successful, teams need guys like Whitworth and Gregg. Unfortunately, the Bengals didn't hold onto Gregg when he was in their paws.

Gregg was drafted by the team in the sixth round (173rd pick) of the 1999 NFL draft (and in case you've surgically removed the memory from your brain, I'll maliciously remind you that that was the Akili Smith draft). He was then waived by the team on September 6 and re-signed to the practice squad on the 8th. He surfaced on the Philadelphia practice squad later that year and the next, before becoming unemployed in 2000. Rex Ryan, then the Baltimore Ravens defensive line coach, took a look at Gregg, whom he coached back in 1998 at the University of Oklahoma, and signed him to the practice squad on 13 September 2000. Since becoming a full-time player in 2002, Gregg has:

Like Whitworth, Gregg is the kind of player whom many think has been a Pro Bowl snub multiple times -- an unsung hero who does the dirty work in the trenches that allows the flashy parts to go about their business. The Bengals could have really used a guy like that this past decade.

So, Kelly Gregg over Charlie Joiner? Bananas, right? Let me attempt to articulate my madness:

I'm not wholly convinced that Joiner becomes the same statistically Hall of Fame player in Cincinnati. There's no way of knowing really, but I'll go by Joiner's own admission that Don Coryell's system transformed him into the superlative player he became. Does he really catch as many balls, for as many yards, from Ken Anderson in Cincy? Let's look at Joiner's three biggest seasons, 1979-81. In 1979, when Joiner caught 72 balls and John Jefferson caught 61, San Diego QB Dan Fouts attempted 530 passes, completing 332; overall the team was 338-541 in passing. That same season, Anderson and Jack Thompson attempted 426, completing 228. The next year -- when Joiner caught 71, Jefferson 82, and Kellen Winslow 89 -- the ratios were closer, with Charger QBs going 350-594, while Bengal QBs went 281-509. Then in 1981, San Diego QBs (and others) went 368-629, while in their Super Bowl year the Bengals went 332-550 (counting a 1-3 by WR Steve Kreider). More passing attempts = more chances for receivers to catch balls, especially when the majority of them are thrown by Hall of Famer Fouts. Collinsworth proved that Cincinnati could produce a top-flight receiver, but he was always the team's leading receiver. Even in some of his best seasons, Joiner wasn't the top target for the Chargers. I think the system and the complimentary players really helped build his numbers. Not to be dismissive of Joiner's refined skills and work ethic (he's clearly an exceptional player), but there were just a lot balls being thrown around in San Diego.

Also, I've put this list together based not just on what these guys did after they left the Bengals, but how I think they might have helped the team had they stayed. The Bengal offense did well enough in the Ken Anderson era without Joiner. The team had a number of good receivers in the absence of Joiner, like Curtis, Cris Collinsworth, Eddie Brown, and TE Dan Ross. Of course Joiner would have been an excellent player to have, but the offense didn't flatline without him (for example, during Joiner's first big season in San Diego in '76, the Bengals had the sixth best offense in the league).

Which gets us to Gregg. I think he's a guy that could have really helped the team during the early 2000s when their defense was struggling to support the dynamic offense. During that span, the Bengals never really had a guy who could move linemen out of the way to free up rushing lanes or a run-stuffer up the middle to shut down bruisers like Jamal Lewis. How many times did we see teams running out the clock on the Bengals' comeback chances with straight rushes up the gut? How many time have we seen the Bengal D fail to get any pressure on the QB? Gregg could have been that lynchpin in the middle, in either a 4-3 or a nose tackle in a 3-4, had the team chosen to go that way. Trent Smith, a former Sooner and Raven teammate, put it this way:

"God built Kelly Gregg to be a nose tackle. There’s no other job that Kelly can do better [...] He has a low center of gravity and has Tyrannosaurus Rex arms. He gets the job done. He has such a presence about him. There aren’t a lot of people in the NFL who can move him out of the way without getting some help. He gets double-teamed constantly. Any good nose tackle does [...] For how short and stocky Kelly Gregg is, he is incredibly nimble. If I’m a center, that’d freak me out a little bit."

A three-time Oklahoma state champion wrestler in high school, Gregg turned down a scholarship to wrestle at Oklahoma State because he wanted to play football. Instead, he used his wrestling background the become an All-Big 12 first team lineman at U of Oklahoma in 1997 and 1998. Short and stocky (barely 6', about 320), with almost no neck, Gregg ain't much to look at, something he's pretty candid about in describing his NFL career:

"I just needed a franchise to believe in me and say, 'We don't care what you look like' [...] To say, 'As long as you can play, we've got a spot for you.' But a lot of guys get caught up in that eye test. I never could pass that eye test, either in football or with the ladies."

But while he's no Jason Taylor, Gregg is strong like bull, able to bench about 550 pounds. He's been an immovable object on the Ravens' d-line, something the Bengals lacked, at least before getting Domata Peko.

The Bengals must have been able to look beyond Gregg's squat physique to that power enough to want to draft him, but they clearly didn't see much in him afterwards. When we was signed to the practice squad, a Bengal personnel director was quoted as saying, "Kelly will never play in the League, and he is lucky to have a practice roster spot." That perspective turned out to be a great boon to the Ravens. Overshadowed on their vaunted defense by more prominent names like Ray Lewis, Ed Reed, Adalius Thomas, Trevor Pryce, Bart Scott, Terrell Suggs, and Chris McAlister, Gregg has been the anchor that's held it all in place, his presence in the middle freeing up Lewis, who talks about Gregg as his "partner," to run wild. And his teammates, who call him "Buddy Lee," understand how valuable Gregg has been:

"In Denver, anytime we watched film of the Ravens, our D-line coach would go crazy," Ravens teammate Trevor Pryce told the Washington Post. "He would praise Kelly and say, ‘Aaghh, that’s the best player in the NFL.’ He’d say it all the time. He loved him. Our D-line coach was one of those old hard-nosed guys, and he’d say all the time that Kelly is the best defensive lineman in the NFL."

In 2005, Gregg was passed up in the Pro Bowl voting, even though he statistically out-performed the interior lineman who made the roster, but his team recognized him in 2006 when he was named Ravens lineman of the year, the same year he was able, as likely the slowest guy on the field, to track down Mike Vick and slam him to the ground during a game against the Falcons. 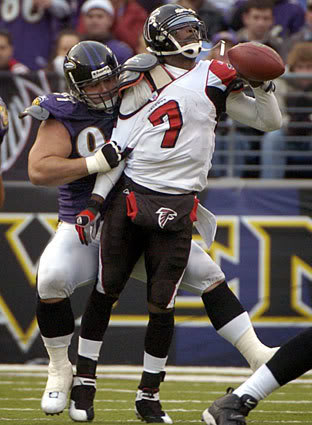 On top of all that, Buddy Lee appears to be a solid teammate and a likeable guy. As Smith tells it:

"I don’t even know if there are words to describe that guy. He’s got a contagious personality, a contagious attitude, he works hard, he always seems to be happy. He loves his wife and his kids more than any father reasonably should, it seems. He’s just a good man, you know."

Gregg is now in the twilight of his career. Injuring his knee in the first week of training camp, Gregg missed all of 2008 after having microfracture surgery. He had another solid 2009 season, recording 63 tackles and 3 sacks, but he slowed down last year and is getting pushed out by recent Ravens draft pick Terrence Cody. Even so, Gregg will go down as a Raven great and one of the most undervalued players of his era.