No. 3 on our list is a name that's been popping up here on CJ quite often lately: WR Charlie Joiner

Now, Joiner isn't totally a guy the Bengals gave up on or let walk away. Rather, he was part of a calculated exchange. But when you're a team that has only two players in the Hall of Fame and one of them is only marginally associated with you for having been traded away, then I think it counts. For while he developed into an OK receiver in his time with the Bengals, Joiner became a superstar and a Hall of Famer only after he left.

Joiner played his college ball at Grambling State and was drafted in the fourth round by the Houston Oilers of the old AFL. Although he was a wide receiver at Grambling, the Oilers intended to turn him into a DB. While he began playing on the defensive side of the ball, by the end of the season he was logging more time as a WR and a punt/kick returner before a broken arm ended his season. Another broken arm ended the following season prematurely, but he finally established himself as a legitimate wideout in 1971 when he hauled in 31 passes for 681 yards and seven TDs. Despite that, the Oilers traded him and another player to Cincinnati during the '72 season for running backs Paul Robinson and Fred Willis.

Arriving in Cincy, and wearing Robinson's old number 18, Joiner struggled to get playing time and passes because of injuries and competition from Isaac Curtis, Chip Myers, and TE Bob Trumpy. In his first season and a half, Joiner garnered only 21 catches for 347 yards, but staying healthy for the first time he went on to became a more consistent target for QB Ken Anderson. By 1975 he was the team's third leading receiver, behind Curtis and RB Boobie Clark, with 37 catches for 726 yards. But more importantly, during his time in Cincy Joiner was able to learn from quarterbacks/receivers coach Bill Walsh, another Bengal cast off who went on to become a Hall of Fame coach with the 49ers. Walsh later described Joiner as "the most intelligent, the smartest, the most calculating receiver the game has ever known," and when he left Cincinnati after the '75 season to become the offensive coordinator for San Diego, Walsh strongly recommended that the team trade for Joiner. 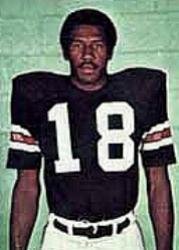 On 2 April 1976 the Bengals did ship Joiner to the Chargers (losing two future Hall of Famers in one offseason -- only the Bengals). With Dan Fouts firing bullets his way, Joiner blew up in that '76 season, snaring 50 balls for 1,056 yards (a sick 21.1 yards per reception) and earning a Pro Bowl selection. And the rest, as they say, is history. Joiner played 11 years in San Diego, racking up 586 catches for 9,203 yards. His numbers were aided by the arrival of Don Coryell as head coach in 1978. His "Air Coryell" offense enabled Joiner to go on to post three straight 1,000-yard seasons:

As Joiner later said, "There's no way I would have had the success I had if I hadn't been traded to San Diego [...] When Coryell became head coach in 1978, that's when my career took off. I caught fire when they started throwing me passes."

When bad knees forced his retirement after the 1986 season, at the age of 39, Joiner had the most catches (750) and most receiving yards (12,146) than any player up to that time. Joiner is currently the receivers coach for San Diego.

Of course, when the Bengals traded Joiner in '76 they got a fair return in DE Coy Bacon, otherwise Joiner would be #1 on this list. Bacon went on to "unofficially" rack up 21.5 sacks that season (though Bacon claims it's 26), making the Pro Bowl, and he proceeded to have another good season in '77 before complaints about the organization got him shipped off to Washington. Bacon himself may wind up in the Hall. If he does, the Joiner trade becomes even more of a level deal.

And who knows if Ken Anderson and the Bengals could have turned Joiner into a Hall of Famer. I suspect probably not -- he may have just been the perfect fit for Coryell's high-flying system. Or maybe he just needed to stay consistently healthy in order to blossom the way he did. Regardless, Joiner's brief and tepid tenure with the Bengals (he doesn't even rank as the best Bengal ever to wear number 18, losing to Paul Robinson, narrowly losing to his numerical predecessor Paul Robinson) and his subsequent enshrinement in Canton qualify him for a place on this infamous list.