Veterans Of Cincinnati: Best Bengals Players To Wear No. 61 - No. 70 All-Time

Share All sharing options for: Veterans Of Cincinnati: Best Bengals Players To Wear No. 61 - No. 70 All-Time 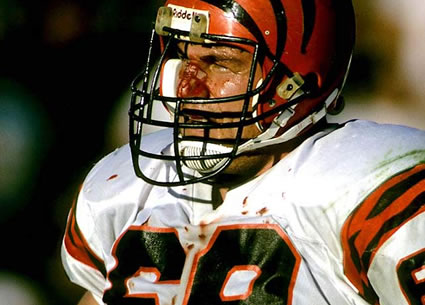 If a Bengals Hall of Fame existed, not the honorable effort from the boys at Bengals.com but actually a Hall of Fame sanctioned and official through the team, Tim Krumrie, a two-time Pro Bowler and a one-time First-Team All-Pro, would easily be enshrined as being one of the team's all-time defensive tackles. Krumrie was so tough that tough guys would say, "whoa, he's tough." During his 12-year career with the Cincinnati Bengals, Krumrie played all but four games (and that was because of the 1987 lockout), posting 34.5 quarterback sacks, four forced fumbles and 13 fumble recoveries. According to Pro Football Reference, Krumrie posted 152 tackles in 1988 and at least 90 tackles in four seasons.

But Krumrie wasn't alone on the defensive line through the mid-to-late 80s. A defensive end, often starting on the right side against some of the league's best left tackles, played just as well during his short four-year stay with the Bengals. Thanks to a prolonged contractual negotiation between the Bengals and their first-round pick Jason Buck in 1987, defensive end Jim Skow was automatically promoted as the team's starting right defensive end.

Sporting a 6-1 record during the team's 1988 Super Bowl season, the Bengals hosted the 5-2 Houston Oilers on October 23, 1988. The Bengals scored 28 points in the first quarter, capped by a Leo Barker 34-yard fumble recovery for touchdown, sealing an early win against a good Oilers squad that finished second in the AFC Central at 10-6. Almost as if destined by the football gods, the game soon ended with a late fourth quarter Jim Skow sack in the end zone, sacking Warren Moon and forcing him to fumble out of bounds for a safety.

Skow wore No. 70 in his Bengals career and is easily the best player that wore the number in franchise history. Announcing our selections for the best players to wear No. 61-70.