Chicago Bears linebacker Lance Briggs tweeted earlier this week that he plans to be fined for wearing gloves and shoes commemorating the tenth anniversary of the Sept. 11 attacks this Sunday. The league explained that no fines will be issued, according to the league's spokesman Michael Signora, saying that players may be allowed to wear special gloves and shoes from official NFL equipment licenses for the first week of games.

"We have extensive plans for Sunday to respectfully recognize the significance of the day," Aiello said in an e-mail. "Lance Briggs and all players will participate."

Bengals middle linebacker Rey Maualuga will be one. According to his twitter account, Maualuga will wear the United States colors with the words "NYPD" on the side. The left shoe will be blue with the right sporting red. 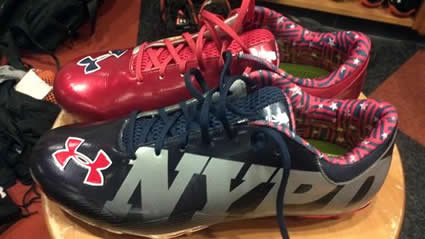 Chiefs running back Jamaal Charles will be sporting "Reebok-issued gloves and cleats to honor the day."

Like Briggs, Charles posted a picture online. It showed an all-red bottom surface around the cleats beneath a white shoe with large blue stripes wrapped around it and white stars along the heel. The back of the glove is all red, with the words, "Never forget," circled around the date, Sept. 11, 2001. The palm of the glove is blue, with white stars.

It's unknown if any other Bengals players are planning to wear anything special for Sunday.