Share All sharing options for: Boomer Esiason Is The First To Welcome Andrew Luck To "Dysfunctional" Cincinnati Bengals 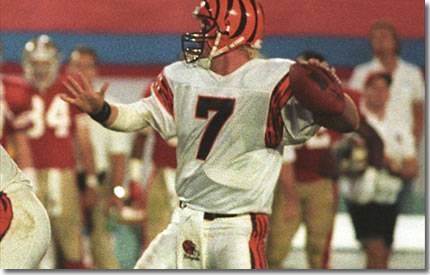 What is it with former Bengals quarterbacks?

Ken Anderson at one point becomes Pittsburgh's quarterback coach from 2007 to 2009. Boomer Esiason decidedly mocks the team on national television with added enthusiasm than he would another team. Carson Palmer is playing his retirement card during a demand for a trade and Ryan Fitzpatrick completes four touchdown passes during the regular season opener against the Kansas City Chiefs when he posted eight scores in 12 starts with the Bengals in 2008. God these former Bengals quarterbacks are frustrating.

During the CBS pregame show on Sunday, Esiason added another rip into his collection of rips, saying "let me be the first to welcome Luck to the truly dysfunctional family that is the Cincinnati Bengals."

Alright. I'm pretty sure a majority of hard working Cincinnati Bengals fans would remark that the Mike Brown family, when it's used in NFL ownership context, could be categorized as dysfunctional. Regardless, welcoming Andrew Luck might be a little premature. Even if we're to believe that the Bengals would select first overall -- something I haven't believed they'd do yet -- what's the rock hard conclusion that the Bengals select Luck? The years of questionable draft picks? The premature cancellation of whatever career Andy Dalton was to build?

The obsessive love affair of quarterbacks from Mike Brown? Let me re-read that again. Alright, perhaps because of the love affair that Brown has for quarterbacks, and since he's generally considered the best quarterback in college since God made the planet Earth, maybe.

Either way, the Bengals won't be selecting first overall in the 2012 NFL draft -- call it a gut feeling. Because when the Bengals aren't beating teams like the Browns and Baltimore Ravens, they're drinking... Cedric, leave the state of Texas for the love god.