Top Wins During The Marvin Lewis Era: Bengals Win Their First Division In 15 Years Against The Lions

Share All sharing options for: Top Wins During The Marvin Lewis Era: Bengals Win Their First Division In 15 Years Against The Lions

+ Bengals Claim The AFC North Championship Against The Lions (December 18, 2005). The Bengals took a 17-point lead in the first quarter against the Detroit Lions and eventually won 41-17. Alright, so it's sort of a blowout against a Detroit Lions team that finished 5-11. What could possibly be important about this game, and why is it ranked so high?

It wasn't so much that the Bengals struggled, then came from behind to win, nor was it any sort of rivalry or, at the very least exciting. Rudi Johnson rushed for 117 yards, scoring twice. Carson Palmer threw touchdown passes to Chad Johnson, T.J. Houshmandzadeh and Kelley "The Squirrel" Washington, completing over 70% of his passes. Additionally John "friggin'" Thornton posted an interception, along with Deltha O'Neal and Tory James. 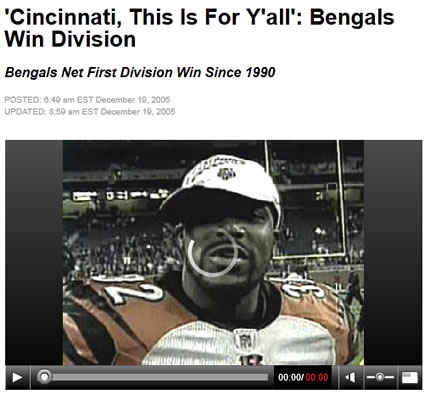 The next day playoff tickets sold out.

+ Bengals Claim The AFC North Championship Against The Chiefs (December 27, 2009). And then 1,470 days later, the Bengals won the AFC North championship again against the Chiefs.