Perspective: Bengals Fans That Continue Paying For Stadium Are Blacked Out

Share All sharing options for: Perspective: Bengals Fans That Continue Paying For Stadium Are Blacked Out 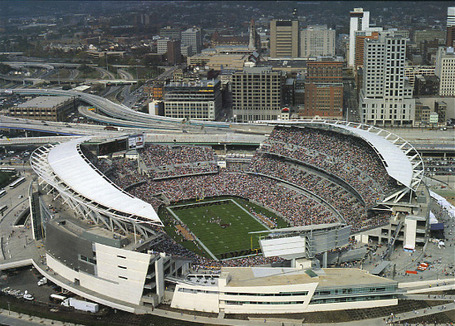 We knew last week that the Cincinnati Bengals weren't going to sellout their regular season home opener this weekend against the San Francisco 49ers. As for the reasons behind it, you choose. Mike Brown. Economy. Mike Brown. General dissatisfaction. Mike Brown. Inconvenience. Mike Brown. Make your selection and I'm sure you'll have a following of your own, banging the drum of one's opinion.

Brian Frederick with SportsFans.org takes a point of view that I didn't even account for -- which is surprising because I am, afterall, me.

But what is particularly galling about the Bengals’ blackout is that the team benefited from what is widely considered to be one of the worst stadium deals for taxpayers in sports. Hamilton County picked up most of the tab and they are paying for it BIG TIME. Here’s how Field of Schemes author Neil de Mause put it: "The initial $280 million price tag ultimately swelled to $350 million (if you believe the Bengals), or $454 million (according to the county), or $555 million (according to Harvard stadium expert Judith Grant Long)."

Hamilton County residents are paying for a product, through the stadium's maintenance contract, that forces them to pay upwards to $60 per ticket for them to even watch. As is the case with most counties that house major cities, a majority of the residents aren't necessarily in a position to spend that money to watch the game, therefore are better served watching it from home; a policy that the multi-billionaire NFL keeps alive when the idea of it has long been outlived as the league has