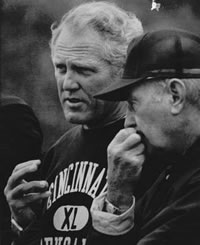 With Cincinnati's weekend showdown against the San Francisco 49ers, we'd be remiss if we weren't reminded about the elephant in the room. History. And we don't mean the Mike Brown history, full of questionable front office decisions that's led to a winning percentage of .360 since 1991. No. This mistake goes back to his father, Paul Brown, making one of the biggest decisions that ultimately defined two franchises. Here's a snip-it from a posting we wrote on May 13, 2011.

On January 1, 1976, head coach Paul Brown decided to retire from coaching, naming Bill "Tiger" Johnson as the team's head coach while Brown would serve as the team's general manager. Walsh, already feeling that Brown worked against his candidacy for a head coaching job in the NFL, decided to resign and leave Cincinnati once Brown passed him over. After a season as the San Diego Chargers offensive coordinator, Walsh spent two seasons as Stanford's head coach until the San Francisco 49ers make their legendary hire in 1979.

By this time, Bill Johnson left the Cincinnati Bengals after the team started the 1978 season with five consecutive losses and even Walsh's two seasons with the 49ers amounted to an 8-24 record. Then 1981 rolled around:

Walsh's 49ers finished the regular season with 13 wins while Forrest Gregg, during his second season as the Bengals head coach, posted a 12-4 record and the AFC Championship. Bill Walsh would face his former team for the first time in Super Bowl XVI.

Including Super Bowl XVI and Super Bowl XXIII, Walsh would go on to post a perfect 5-0 record against Cincinnati.

"By the time we got to those games, I didn't even think of the history," he said. "We were just playing another team. But when the plane took off the first time we beat them in Cincinnati, I looked back down and I was euphoric. I just sat there quietly. It was snowing down there. Lights on. We were gone."