Mike Ditka Has No Respect For Forrest Gregg

Share All sharing options for: Mike Ditka Has No Respect For Forrest Gregg 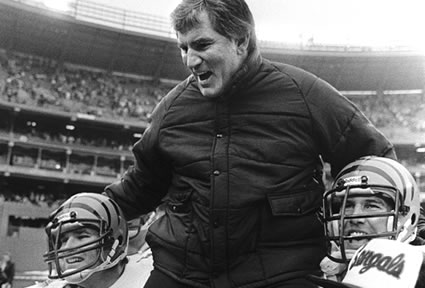 Forrest Gregg has the distinction of being the first Bengals head coach to lead his team to the Super Bowl, going 12-4 in 1981 and the AFC representative at Super Bowl XVI. It's hard to believe that was 30 years ago. Gregg holds the franchise's top winning percentage as a head coach (.557) with Bill Johnson (.545) representing the only other head coach with a winning record; though he only coached 33 games.

And Mike Ditka doesn't like him. During ESPN's Mike and Mike in the Morning, Ditka doesn't much care nor have any respect for Gregg after one of his players body slammed quarterback Jim McMahon into the ground. From Brad Biggs of the National Football Post and Chicago Tribune:

He didn’t have as many glowing things to say about the rivalry when he was a coach during the 1980’s. Those games were marred by some ugly play at times. The worst incident happened in 1986 when Packers defensive lineman Charles Martin body slammed Bears quarterback Jim McMahon to the turf a full two seconds after he’d released a pass, resulting in a right shoulder injury.

"Unfortunately, that was the only bad time in the history of the rivalry, when it got to be ugly," Ditka said. "And it was ugly. You can't try to hurt people and they tried to hurt some of our guys. (Running back) Matt Suhey is lucky he didn't get hurt badly. And when McMahon was picked up by Charles Martin and thrown down, he was lucky he wasn't hurt very badly.

"These things were after the play, after the fact. So either you are coaching that or your players are stupid. That's what I'm going to say. In this case I believe they were coached. That's why I never got along with Forrest Gregg. To this day I don't respect him for that reason. . . . When the play is over and you pick somebody up and slam them on the ground. 'Oh, big deal' (Martin says). I'm a tough guy.' You're not a tough guy. You're a dumb guy."