This Day In History: The Cincinnati Bengals Defeat The San Diego Chargers In The Freezer Bowl

Share All sharing options for: This Day In History: The Cincinnati Bengals Defeat The San Diego Chargers In The Freezer Bowl 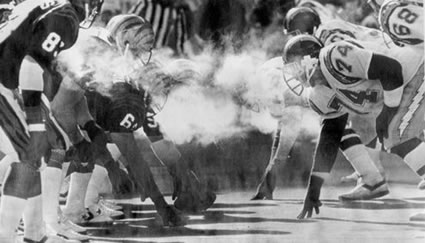 Temperatures reportedly dropped to 37 degrees below zero in what was nicknamed the Freezer Bowl. Factoring in the wind chill, it's was the coldest known NFL game in the history of forever when the Cincinnati Bengals hosted the San Diego Chargers on January 10, 1982, during the 1981 AFC Championship Game. The Chargers comprised of a mighty offense, with future Hall of Famers such as quarterback Dan Fouts, tight end Kellen Winslow and former Bengals wide receiver Charlie Joiner. Though with only one future Hall of Famer on the roster, the Cincinnati Bengals starting lineup had a who's who in Bengals history.

Though names like Ken Anderson, Dave Lapham, Anthony Munoz and Cris Collinsworth are widely known to most folk, others might not be, even to the younger generation of Bengals fans. For example defensive end Eddie Edwards (83.5), Reggie Williams (62.5) and Ross Browner (59.0) remain today as the best three pass rushers in franchise history. Ken Riley (65) and Louis Breeden (33) hold the top two franchise records for most interceptions in a career. Max Montoya is arguably the best offensive guard and Dan Ross held many receiving records as a tight end.

Roughly 46,000 packed Riverfront Stadium, dealing with windchills reportedly 50 degrees below zero and worse, witnessing the Cincinnati Bengals easily beating the Chargers 27-7 to claim the AFC Championship. Bengals players predictably believed that the cold temperatures gave them a decided advantage over a team based out of sunny San Diego.

"We knew we had a feeling for the ball in the cold," Dan Ross told the Associated Press. "We dressed differently than they did. They just had sweat shirts on." Ross posted a team-high five receptions for 69 yards receiving.

"I'm still freezing. And I had on thermal socks, thermal underwear, everything," said Pete Johnson. "I even wore two pairs of gloves. One of them was rubber so I could grip the ball better." Johnson, who scored one of Cincinnati's three touchdowns, led the Bengals with 80 yards rushing on 21 carries.

In the end the weather didn't matter. From the Associated Press:

The sight of the Bengals carrying Coach Forrest Gregg from the field on their shoulders overwhelmed Paul Brown, the franchise's founder, current general manager and former coach.

Gazing down from his box in Riverfront Stadium, Brown said, "I'm choked up, but it's a good feeling. This is a great day for the team and the city."

After all, the Bengals were headed to their first Super Bowl 30 years ago today.

Veterans of Cincinnati. Speak up if you were there or remember watching the game.