It's officially mock draft season. It's still very early and draft boards aren't close to being set, but it's my job to project what the rankings and draft will look like in a few months. Questions and comments are welcome as always. Without further delay, I give you our first Cincy Jungle mock of the draft season.

Is there an explanation needed? Whoever ended up with the first pick was taking Luck.

Vikings add the best LT in the draft to protect their QB of the future in Ponder.

If available, I don't see how the Browns pass RG3 up.

The Bucs could go a number of ways here at five; I'm giving them a LT that can actually protect their franchise QB as they try to get Freeman back on track.

Redskins add youth and toughness to their secondary with Kirkpatrick.

I've learned that when everybody likes a player, that player ends up getting drafted higher than expected. Kendall Wright is that player in 2012.

Brockers is all potential and the Panthers are in desperate need of defensive help.

Miami would have an elite offensive line with the addition of DeCastro.

Blackmon fits perfectly in the Bills offense with their slants, digs and crossing routes.

The Chiefs don't know what they're getting with Jamal Charles' injury. Add a Blue Chip player like Richardson and worry about it later.

Mercilus has the ability to play either DE spot and maybe OLB in the Seahawks hybrid defense.

The Cardinals have one of the worst offensive lines in football. They add a finesse OT in Martin.

Dallas may have a void at OLB opposite Demarcus Ware. Without being able to take a CB or Safety at 14, Dallas adds to their pass rushing abilities with Ingram.

The Eagles haven't taken a LB in the first round since the 80s. Maybe that's why they could have the worst LB corps in the NFL?

For as good as the Jets defense is, they can't get a pass rush without sending the blitz. Upshaw is versatile and can help the Jets become more dynamic on defense. 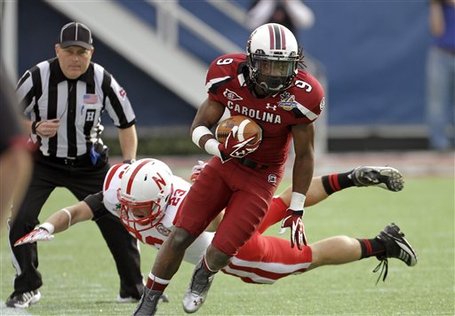 Of the list of the Bengals biggest needs, Cornerback ranks among Guard, Runningback, and Safety as the biggest areas in need of youth and potential. Free agency always changes a team's needs, but CB may be the hardest to fill with a veteran free agent. Leon Hall is coming off of a serious injury and Nate Clements doesn't have many years left. Adding a rookie to that mix would add some youth and athleticism as well as protecting the team from being left without capable players if a starter gets hurt.

Stephon Gilmore may be a surprise pick, but he is the number three CB on my board and is somebody that I project will gain momentum as the draft approaches. Gilmore left South Carolina early and still has some finer points to learn, but he has the size, speed, and athleticism to become a number one CB. He's built like a safety and is very aggressive against the run. He can really lay the wood and isn't afraid to take on RBs and TEs in the flats. He's a sure tackler and has experience in both press and off coverage. He could be that off-man cover CB the Bengals lost in Johnathan Joseph. It's an easy comparison (and I hate to even use it), but Gilmore looks just like Dunta Robinson when he came out. It's more than them playing at the same school and having dreds. It's the way they are scheme diverse, play the run, can employ the "Hit Stick", and blitz the QB. Speaking of blitzing, Gilmore is a natural and one of the best I've seen in years at the collegiate level. I could see Stephon Gilmore as one of the Bengals starting CBs by 2013.

*Note: My full Stephon Gilmore scouting report should be posted sometime in the next few days.

Floyd would be the perfect compliment to A.J. Green's skills as the underneath and over-the-middle type of WR. He also adds the return ability the Bengals should be looking to upgrade. But, in 4-5 years, will the Bengals pay two WRs in their prime?

DE is a bigger need than I first realized. Fanene and Rucker could be gone, Geathers should always been looking over his shoulder and Michael Johnson and Carlos Dunlap have never proven to be full-time starters. Perry could also be that pass rushing Sam LB that Marvin Lewis has been trying to find.

Where is the coaching staff's confidence in Rey Maualuga after an up-and-down year? Will he take the next step in 2012? Is moving Rey back outside an option? With so many questions in the middle, Hightower could be the player to answer them. He could also play the strong side until the LB corps is figured out.

Perhaps the Bengals don't share the same love for Gilmore that I do. The next best on many boards is Alfonzo Denard. I'm not a fan of his skills for the Bengals. He's on the shorter and slower side.

If Pat Sims leaving in free agency, DT is a huge need. Geno Atkins is the man, but Domata Peko is average on most days. Still would be that huge, run stuffing presence to pair with Atkins for years to come, while also adding to the line rotation in 2012.

Chargers could be losing their top two WRs and Floyd can step in day one and provide instant impact.

Jeffrey adds much needed size to the Bears WR corps; could be day one starter.

Perry is an underclassman and hasn't reached his potential; could've been a top 10 pick next year. The Titans could be getting a steal at pick 20. 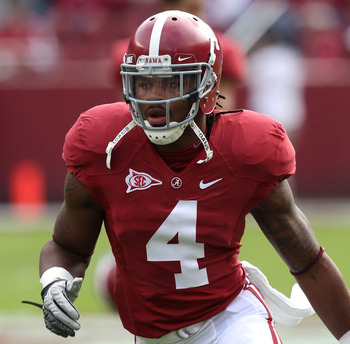 There are a few starting spots open on the Bengals heading into the off-season, safety is one of them. Mark Barron is widely considered the best player in yet another weak safety class. After Barron, there is a significant drop off in talent. If the Bengals re-sign Reggie Nelson, signing another veteran free agent safety may be out of the question. I look for the Bengals to address a position they have neglected for years.

Mark Barron is just starting to become the player he can be. He was always known for his aggressive attitude towards the run. He's made highlights with bone-crushing hits. Heading into his senior year, scouts wanted to see Barron play better in coverage. Can he cover the TE, play deep center field, how are his balls skills, can he change direction good enough? These were all questions in Barron's game. This year, Barron progressed in every one of his flaws and really opened eyes and the imagination of scouts. It looks as if Barron is just now coming reaching his potential and there may be very few limitations to what he can do in the NFL. He's still not the best in coverage but what he offers as an enforcer and run defender are exactly what the Bengals need. With the need to rotate and play both safety spots in Cincinnati, Barron can do just that and also be a leader of the secondary in a few years.

Even though he played center, Konz is my number two rated guard and he comes from a very similar offense in Wisconsin. A lot of their same line concepts the Bengals also use. He would step in and start at RG on day one.

The Bengals haven't had a real home run threat at RB since I can remember. Players like Miller are rare. In fact, there isn't another player like him in this draft. He has blazing speed and elusiveness that the Bengals lack.

Again, why do I put a WR on this list? Over last few years, WRs taken in the late first round have found success and a good rate. Look at the most successful offenses in the NFL. They have more than one WR. The Bengals need to surround Dalton with as many weapons as possible.

Coples is a boom or bust type player. He is very similar to our own Carlos Dunlap. Big frame, strong and can run. Why doesn't he have more sacks? More talent than he is football player. As always with these types of guys, their best should be ahead of them.

Jenkins has made his own bed. Now he has to sleep in it. He could've been a top 10 pick had he kept himself clean. Instead he transferred to a DIV II school and played pretty average. The only thing saving him now is his electric return skills.

The Browns are fine at MLB with Jackson, but he isn't getting any younger and has dealt with injuries in the past. Hightower could start at strong side until he moves to the middle.

The Lions have the pass rushers, now they need the secondary to provide some coverage. This defense could be lethal with another CB and safety.

Steelers go best-available-player here and like always, find a gem. Davon Still can replace Casey Hampton at NT by the end of 2012.

Cox is going to rise up draft boards by April and the Broncos can complete their front-7 by adding him.

Brown is a crazy talent and the Giants could use more athletes in the LB corps.

Andre Johnson has always been injured and has never played with a legit threat opposite of him. Jones alleviates pressure from Johnson and can be their go-to guy in a couple seasons.

Ravens add a player that can help the defense by getting pressure on the QB. Right now, it's only Suggs.

Konz can play either Center or Guard and you have to think the 49ers would love to keep running the football and protecting Alex Smith.

The Patriots biggest issue on offense is their inability to beat man-to-man coverage on the outside. Sanu provides a big body that can win outside the numbers.

Packers always draft best available, Miller is not only that, he fills a need. He could be the final piece to an almost perfect offense.