Share All sharing options for: Two Runs That Beat The Cincinnati Bengals

By the time the Cincinnati Bengals kicked off their regular season finale against the Baltimore Ravens, they had no idea that the late afternoon games would eventually favor Cincinnati's postseason itinerary. An early afternoon loss by the New York Jets established a scenario that only required a Denver or Oakland loss to claim the sixth and final playoff berth. Thankfully it was the Broncos that lost before Cincinnati's game ended, which guaranteed them a spot in the 2011 NFL Playoffs. That being said, if the Bengals give up huge runs during the postseason like they did against the Baltimore Ravens on Sunday, their playoff experience in 2011 will be over before it even begins.

Inches shy from the first down marker on third down, the Baltimore Ravens lined up from their own 29-yard line with 14 minutes remaining in the first quarter. Joe Flacco received the snap, spun to his left and handed the football to fullback Vonta Leach, who converted the first down with his 12th carry of the season -- but only barely with a well-placed spot. Following a Baltimore timeout, the Ravens setup with an offset-I strong-side to the right. The Bengals showed a base 4-3 formation with Thomas Howard on the weakside and Chris Crocker to Carlos Dunlap's left.

Fullback Vonta Leach wiped out Chris Crocker at the line of scrimmage. Ed Dickson reached the second level and shadowed Manny Lawson's flow away from the point of attack. Right tackle Michael Oher took a quick step to his right while Carlos Dunlap cut inside allowing Oher to easily open the lane.

Rey Maualuga, the team's key defender on the play, was cut-off by Ravens right guard Marshal Yanda, sealing the inside and giving Ray Rice a massive lane.

With the offensive line maintaining their blocks, Ray Rice exploded for a 70-yard touchdown run to give the Ravens an early seven-point lead.

The Baltimore Ravens, leading 17-13 with under six minutes remaining in the game, was fighting off a vicious Bengals assault that began late in the third quarter. Additionally Cincinnati's defense held Baltimore's offense throughout much of the second half, forcing four punts on four possessions by allowing only two first downs. The crowd at Paul Brown Stadium rambunctiously cheered the defense on third and one from the Ravens 49-yard line.

Leach collided with Maualuga, sealing the linebacker inside while running back Ray Rice cut off Leach's left hip. 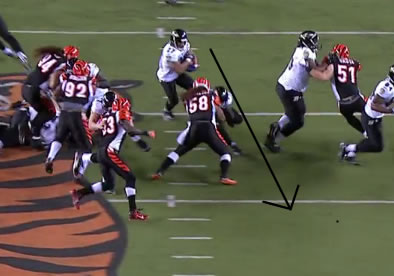 Once Rice broke through the line of scrimmage, he sidestepped safety Reggie Nelson and 51 yards later, the Ravens took a 24-13 lead with 5:41 remaining in the game.

Though Cincinnati's defense played well enough to win throughout much of the game, the Bengals loss on Sunday boils down to two plays -- Ray Rice's 70-yard touchdown that gave the Ravens an early lead and his fourth quarter 51-yard touchdown that sealed the win.

Cincinnati's defense held Rice to 70 yards rushing on 22 of Rice's 24 carries, but the damage was done on two touchdown runs that accumulated 121 yards. Even though the loss extended Cincinnati's season by at least one game, heading into a Saturday afternoon playoff game against the Houston Texans, the Bengals can't expect to be contenders in the playoffs this year if they're going to allow huge runs like they did against Baltimore.