Following Mike Nugent's 46-yard field goal with over three minutes remaining in the first quarter, the struggling Bengals offense would go on to register three punts and a failed 36-yard field goal attempt on their next four possessions (not including the knee to end the first half). Panic was setting in by the five-minute mark in the third quarter with Baltimore holding a commanding 17-3 lead over Cincinnati.

Thanks in part to a strong defensive effort in the second half by the Bengals, Baltimore was pushed back to their own 11-yard line on fourth down. A 46-yard punt and a Brandon Tate nine-yard return later, the Bengals were already on Baltimore's end of the field with 5:21 remaining in the third. Cincinnati needed to score on this possession, giving them a reasonable opportunity for a comeback.

After acquiring a first down to convert a third and seven, the Bengals lined up on Baltimore's 25-yard line with 3:35 remaining in the third quarter. Andy Dalton stood behind the center in shotgun with Bernard Scott flanking his right.

Like an old western stare-down, Lewis angled his attack into the developing lane with Bernard Scott holding the football. If this were Cedric Benson, he would try to gain as much yardage as possible with a collision.

Scott is at his best when he's not acting like Benson.

Rather than taking on Lewis in what would be a losing battle, Scott redirected outside leaving Lewis off-balance just enough to keep separation between the two.

With a little help from wide receiver Ryan Whalen slowing Chris Carr just enough, Scott successfully turned the corner on the outside with three Baltimore Ravens (including Lewis) in pursuit, led by safety Ed Reed.

Ed Reed tried tackling Scott high, but simply fell off the attempted tackle giving Scott an open lane into the endzone, assisted with a great block by A.J. Green on Cary Williams. 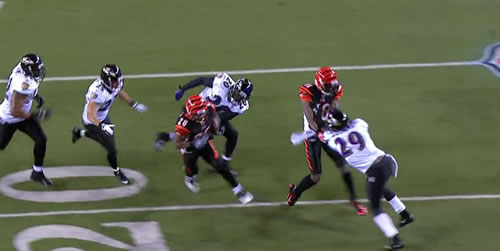 Once Reed was out of the equation, Scott easily scored the touchdown reducing Cincinnati's deficit to seven points.

The Bengals would close in with another field goal but a Jermaine Gresham fumble in the fourth quarter led to a 51-yard Ray Rice touchdown that sealed Baltimore's win.