Share All sharing options for: Kevin Coyle's Interview Set For Miami On Wednesday 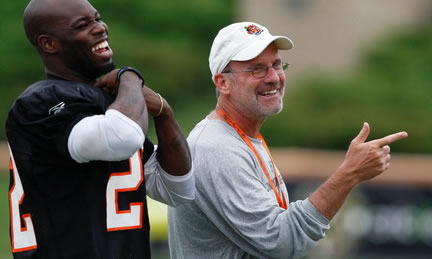 Not only is Cincinnati's defensive backs coach Kevin Coyle interviewing for Miami's defensive coordinator's job, he appears to be a front runner for the position as well, according to Omar Kelly of the Sun Sentinel. Early Tuesday morning Alex Marvez reported that the Miami Dolphins were granted permission to speak with Coyle and that interview will take place on Wednesday, according to NFL Network Insider Jason La Canfora.

How Coyle received consideration in the first place, beyond the apparent league-wide respect, could be Mike Zimmer. Fox Sports Florida conjectured that the Miami Dolphins took a greater look at Cincinnati's coaching staff when Zimmer was in consideration for the head coaching position that former Packers offensive coordinator Joe Philbin filled.

As for the Bengals allowing permission for Coyle to interview for the job, we can only surmise two probabilities. One the Bengals are fairly confident that Zimmer will return in 2012 -- Coyle was expected to be heavily considered to replace him. Or more likely the team wanted to give Coyle a chance for expansion as a defensive coordinator and having already rejected an opportunity once, they felt somewhat compelled to give him another shot that surfaced this offseason.