Punting from their own 24-yard line midway through the second quarter, already down by three points is risky enough. But the risk warranted the rewards.

Share All sharing options for: Risky Fake Punt Built A Lead That The Bengals Never Lost

Oh. My. Lord. Those were the hand-written notes on my wide-ruled parchment, within reach for poetic moments to articulate my life's work in memoirs that I intend to publish one day. At one point earlier during the game, the Cincinnati Bengals offense seemed lifeless, dead, showing no life. Sure there was a play here or there, but let's be honest. Cincinnati had already turned the football over and were losing to the Jacksonville Jaguars and quarterback Blaine Gabbert, who posted a 107.5 passer rating in the first quarter.

A ten-yard Jermaine Gresham completion to the Bengals 34-yard line falls one yard short of a first, setting up another fourth down and eventual Kevin Huber punt. Of the four third down opportunities midway through the second quarter, the Bengals hadn't converted any (not including conversions by penalties, which do not count).

Anyway it's time for a punt and a kitchen break, taking orders from friends who just used your couch as a punching bag. Nobody really watches punts anyway.

Still they have a job to do and the punt team jogged onto the field with 8:36 remaining in the second quarter from the Bengals 24-yard line. On a personal note, let me present to you our first-ever screen shot of the Cincinnati Bengals punt team with a randomly placed black circle that happens to be encapsulating Cedric Peerman.

FAKE PUNT! Again the words in my notebook. The beauty of the called fake worked, not only because Jacksonville's punt coverage team aligned themselves in such a way it made Cincinnati's blocking scheme easier... 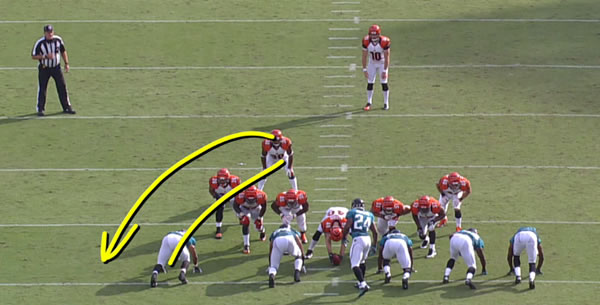 ...but the gunner Andrew Hawkins jogs out of bounds, consuming two Jaguars not unlike tourists watching a Lion in the Serengeti.

Though doing their jobs by sticking on Hawkins like white on rice, by the time both Jaguars realized it was a fake, Cedric Peerman was well on his way, picking up 48 yards on the punt fake.

Excitement. Roars of cheers. But again. The Bengals struggled moving the football. Couch. Meet hammering fist of frustration. Following a BenJarvus Green-Ellis five-yard gain, Dalton throws consecutive incomplete passes. But much like the third down early in the game that resulted in a roughing the passer, Jermaine Gresham draws a defensive pass interference, putting Cincinnati on the one-yard line. On second and goal from Jacksonville's one-yard line, Dalton fakes the handoff right. Jacksonville's entire defense bites hard as Dalton rolls out to the left.

Chris Pressley released from the backfield into the endzone where he posted his first career touchdown on Andy Dalton's throw. Bengals take a 10-7 lead.

It was just too easy.