Tipping Their Hand: Are The Bengals Showing Trends Based On Formations

The Cincinnati Bengals are beginning to show trends based on formations, suggesting either a run or pass based on the number of receivers on the field.

Share All sharing options for: Tipping Their Hand: Are The Bengals Showing Trends Based On Formations

The reasoning behind Andy Dalton slinging the football 43 times against the Miami Dolphins made sense. At the time. Theoretically it took advantage against one of the weaker passing defenses in the NFL while somewhat avoiding Miami's top-ranked rushing defense. Again. It made sense.

Yet when we perused the offensive snaps against the Dolphins, we noted that fullback Chris Pressley only contributed eight times on offense, the lowest since his six snaps against the Houston Texans during the regular season last year. And of those eight snaps, only five were during running plays. Seriously. The game plan against Miami's top-ranked rushing defense largely relied on three-wide formations without a lead blocker for BenJarvus Green-Ellis. Curiously we wonder why he only generated 14 yards on nine carries.

Yet it's not surprising that Cincinnati only ran the football a season-low 19 times on Sunday because it's entirely possible that they're showing their hand already, based on trends through formations.

For example when Cincinnati employs a two-wide formation (or less) during the first three downs combined, the Bengals have run the football 60.3 percent of the time. Now the opposing defense can focus on run blitzing the Bengals with an eighth man in the box. When presenting a three-wide set or more, there's a 74.3 percent likelihood that they're passing the football, allowing pass rushers to pin their ears back without the need to contain the edges during possible runs. 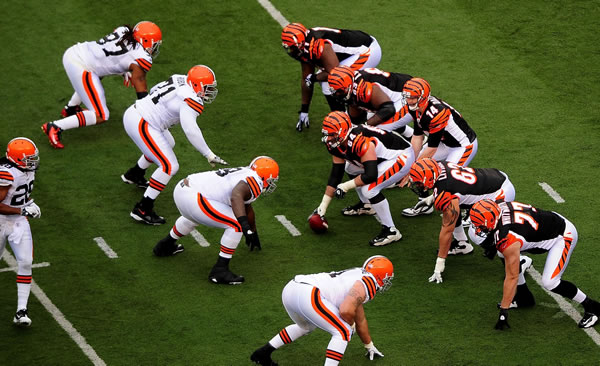 Broken down to its more basic elements, if the opposing defense observes that Chris Pressley is joining the huddle, the Bengals are most likely running the football; which through five games, they have 62.2 percent of the time.

On the other hand when Andrew Hawkins is in the game, they've passed the football 75.1 percent of the time. As much credit as we've given the Bengals this year, their reliance on big plays to score a majority of their points is during broken coverages combined with outstanding athletic talent. Their inability to convert sustained drives into touchdowns, rather than field goals, is notable based on their trends.

Now obviously every scenario will often dictate the formation. You're not going to show five-wide empty-backfield on third-and-one from midfield. Nor are you going to show jumbo formation with Dennis Roland as the third tight end and Chris Pressley lead-blocking on third and ten.

During the 36 scenarios requiring five yards or more to go on third down, the Bengals have presented a three or four wide set on all but three plays and thrown the football 31 times (86.1 percent). Yet of the 32 scenarios with two yards or less to go, 20 employed two receivers or less. Hey at least they showed more than two receivers 12 times with two yards or less to go and managed to pass during half of those situations.

Granted. It's not wise to consume this sort of data with 100 percent conviction. Too many variables exist for coaches to consider, such as matchup advantages, weaknesses on the defensive line or the trends of an opposing defense. Yet we can't help but think that good defensive coaches are noticing as well, which may have contributed already against the Bengals last weekend. Or perhaps we're still shocked about a game played four days ago. That's entirely possible. I do tend to have a hard time to let some things fade.