Football Outsiders provides a striking sack. Most of Andy Dalton's quarterback sacks could be self-inflicted.

It's the stinking offensive line, bro. They can't block worth a damn while our precious second-year quarterback is assaulted from every angle, forced to quicken his throws which poses an increasing risk for a mistake being made. No, "bro". The offensive line is far more stoic against the uninformed than you're puny mind allows. Andy Dalton must do a better job getting rid of the football or he's going to single-handedly crash an asteroid, comprised of 95 percent railroad spikes, into Cincinnati.

The above is a conversion we suppose could happen among the gifted that slightly overreact to things. And we've all had our share of conversations dealing with those champions of optimism. Especially writers who've talked Cincinnati Bengals for nearly ten years who accidentally handed out their cell phone numbers.

Football Outsiders accumulated interesting data based on the amount of time that eclipses before a passer takes a quarterback sack. It's broken down into two segments. There's the short sack, "defined as a sack of 2.4 seconds or less" and the long sack, "those that take three or more seconds". The idea theoretically explores the difference between an offensive line blowing an assignment, failing to pass block and those quarterback sacks taken by passers for holding onto the football far too long.

Let's read the final page of the book.

Andy Dalton is the worst.

According to their data, of Andy Dalton's 15 quarterback sacks, the Bengals quarterback has taken 12 "long sacks" against 184 passing attempts. Now this suggests a duel meaning, which wasn't explored in the analysis from Football Outsiders. One. Dalton is definitely holding onto the football too long. Two. Coverage sacks are a significant issue because receivers are failing to get open, forcing Dalton to hold onto the football before being assaulted by the opposing pass rush. Problem with the receivers or the offensive schemes?

With 13:18 remaining in the first quarter against the Miami Dolphins, Dalton posed at least four seconds after the snap before the pass rush threatened. A.J. Green and Armon Binns were covered; especially Green who had three defenders shadowing his vertical. On the other hand tight end Jermaine Gresham was left wide open near the right sidelines well before the rush hit Dalton. 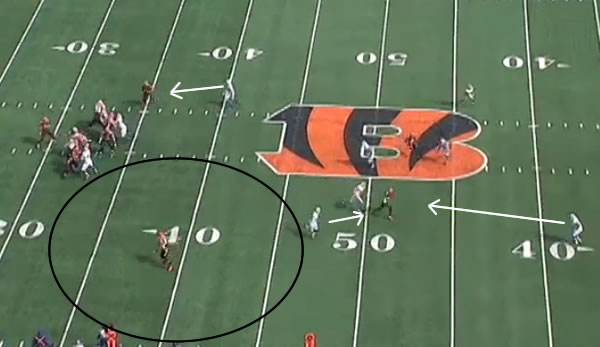 We fast forward to the 6:21 mark in the second quarter on first down. Dalton took a five-step drop and faced a well-designed coverage scheme that neutralized Cincinnati's two receiver route, leaving one option left. 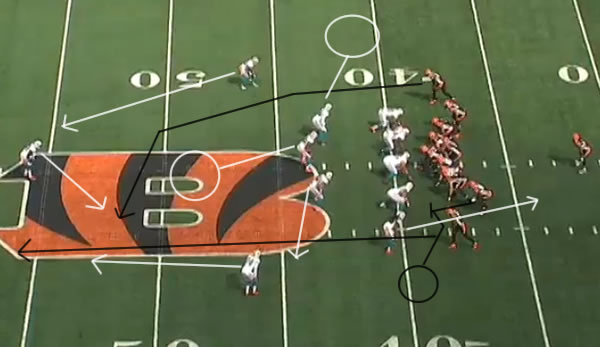 Tight end Orson Charles flairs out into the flats after a chip block, open with a fairly distant linebacker closing.

Dalton didn't see him. Though the gain could have been limited, it's still a positive play. On the other hand if Charles forces a missed tackle, there's plenty of green in front of the rookie tight end, who is looking at the back of the nearest defender.

Yet we have no idea why Andre Smith blocked inside, leaving Jermaine Gresham alone with Cameron Wake. We're going to assume it was more play design, but even Smith should have the presence of mind knowing that Miami's best pass rusher is lined up against Gresham. 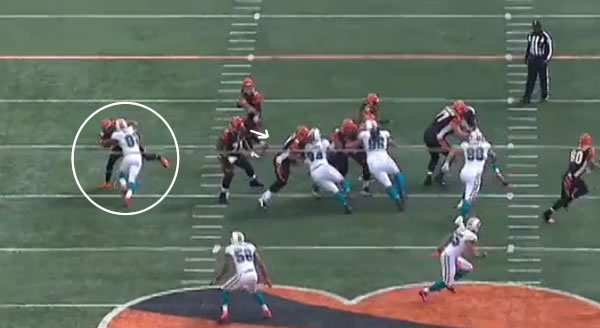 We're not being critical of Dalton here -- rather promoting observations based on Football Outsiders analysis. And to blunt, no one knows Dalton's true progression on any given pass play; meaning it could be as much an issue with the play design as it is Dalton missing open receivers/tight ends. Either way we do agree with one aspect of the analysis. Dalton needs to get rid of the football sooner.