It's Not Just Jay Gruden: Breaking Down Bengals Unsuccessful Third Down Conversions

We breakdown Cincinnati's failed third down conversions against the Cleveland Browns on Sunday.

Share All sharing options for: It's Not Just Jay Gruden: Breaking Down Bengals Unsuccessful Third Down Conversions

Following Cincinnati's 34-24 loss against the Cleveland Browns, growing impatience is trying to decipher the problems facing the Bengals offense. Though we'd like to point out that it's something like scheme, play-calling, or running, it always boils down to something simpler: Execution. Jay Gruden can call the perfect play, but if not executed correctly, the perfect play is nothing more than a botched attempt to out-scheme the opposing defense.

Cincinnati opens the game with consecutive BenJarvus Green-Ellis runs, generating seven yards to the Bengals 24-yard line leaving a third and three with 13:47 remaining in the first. Dalton fakes the handoff left and rolls out right. Orson Charles, the right tight end, fakes with an in-route and then cuts out giving himself separation from a trailing D'Qwell Jackson beyond the first down marker. Andy Dalton's pass is knocked down at the line of scrimmage by Jabaal Sheard. 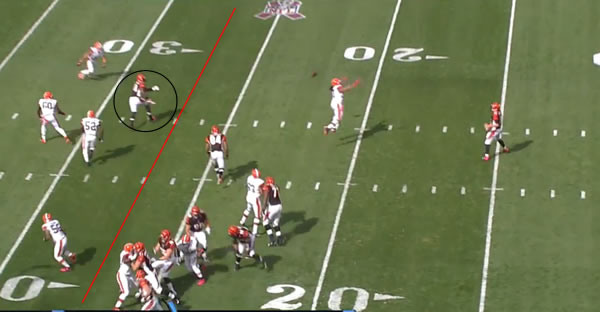 That's not so much a Gruden play-calling issue and probably not directly a fault of Andy Dalton's for not arching the football over Sheard. There's only so much arch allowed on a short pass before Orson Charles' open route closes with three defenders in the immediate area. Sometimes we can just label a play as a good defensive effort and call it a day.

Again the Bengals offense generates seven yards during first and second down combined, leaving third and three from Cincinnati's 40-yard line with 2:15 remaining in the first quarter. Jermaine Gresham flanked Andy Dalton's left in shotgun, flaring out once the football is snapped.

The unacknowledged theme seemingly goes unnoticed, it always boils down to execution. The football was high and Gresham was unable to haul in the football that he probably could have caught. And if it's caught, Gresham has room to work with. Instead the Bengals punt.

Over five minutes remain in the second, Andy Dalton drops back, on third and 14 from Cincinnati's 43-yard line, holding onto the football. Yet he had the perfect pocket and... leaves?

By rolling out to the right Dalton essentially halves the field, allowing the defense to worry about the side Dalton is rolling to. The second-year quarterback forces the football to Armon Binns, two yards shy of the first down, nearly picked off by a diving Joe Haden.

If only he stayed patient.

Again with 14:01 remaining in the third quarter on third and eight from the Bengals 47-yard line, Dalton's impatience and obvious discomfort in the pocket, forces him to roll away from Brandon Tate's developing route. 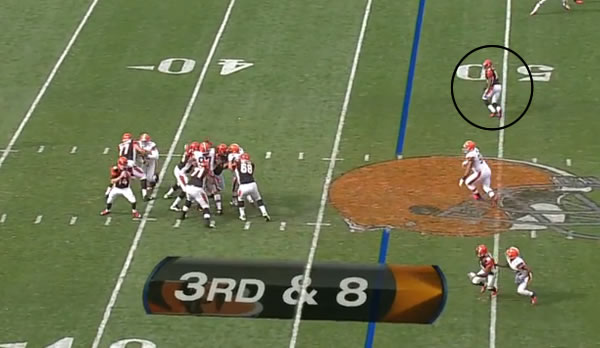 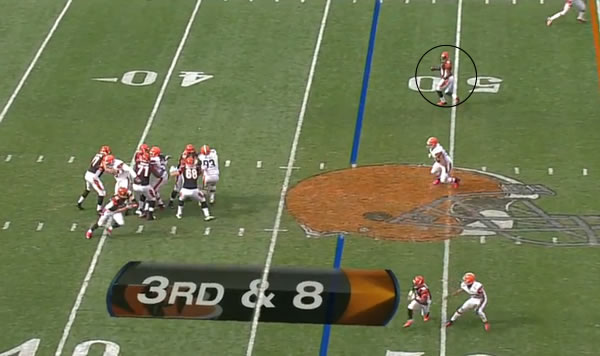 Dalton scrambles for a two-yard gain and the Bengals punt.

And when he releases the football quickly on third and 14 with over ten minutes remaining in the third, he hits Armon Binns' five-yard in-route, nearly ten yards shy of the first down marker. Now we question if that's the result of Dalton's progression, instruction or a conservative call from the coaching staff, hoping Binns makes a play after the reception? We don't know. Perhaps it was all the defense gave, without trying to force a pass that could lead to an interception. What we do know is that the Bengals went three and out, compounded by a limited end around from Andrew Hawkins, incomplete and delay of game. All of the parts are not equaling the whole.

Another route short shy of the first down marker was incomplete on third and eight with over five minutes remaining in the third, broken up by cornerback Sheldon Brown.

But let's return to the whole "execution" point. It's third and five with 11:20 remaining in the game from Cleveland's 26-yard line. Dalton takes the snap and targets Jermaine Gresham, wide left and running a ten-yard in-route with T.J. Ward covering. The football was incomplete because Gresham slipped during his break.

If he stays on his feet, it's easy to conclude that Gresham boxes out Ward's coverage, picks up at least ten yards and sustains a drive that, if resulted in a touchdown, gives the Bengals a one-point lead. Instead Mike Nugent converts the field goal and the Bengals are down by three with over 11 minutes remaining in the game.

And sometimes the opposing defense just calls the better play. With 10:25 remaining in the second, the Bengals have third and seven from their own 32-yard line. Dalton takes the snap, holds onto the football and watches Cleveland's underneath coverage blanket crossing routes, negating A.J. Green and Jermaine Gresham's deeper in-route. Dalton flushed himself out of the pocket and flipped it to Brian Leonard for a limited three-yard gain.

We need to point out two things.

We mostly focused on unsuccessful third down conversions, most of which were passing downs that focused on Dalton and his receivers. Obviously we didn't detail the lack of production on first and second, or the overwhelming mistakes (penalties) that pushed Cincinnati into long third down situations. At this point we just assume you know that we know that.

We've also pointed out all season that most of us have never played quarterback and we've certainly never played a down in the NFL. So we can't articulate the complexities of playing quarterback, arguably one of the toughest positions in professional sports. These are largely observations with some noticeable lines of frustration mixed in. Additionally we're ignorant to the plays actually being called, the progressions and expectations on a given play.

Finally this is not meant as a cutting critique of Dalton and the Cincinnati Bengals of 2012 with any tone of finality. We get that his NFL career has only spanned 23 games and his ceiling is exponentially higher than what we've seen this year. Additionally Jay Gruden's offense and the wide receivers are just as young and developing just as much.

Yet our very generalist conclusion at this point, explaining Cincinnati's league-worst 27 percent third down conversion, is a matter of execution. Not just with Dalton, but everyone involved, including Jay Gruden.