The Bengals and Steelers, both with disappointing starts to the season, are looking to correct concerning paths this year. Neal Coolong at BTSC explains Pittsburgh's early season issues.

The Pittsburgh Steelers and Cincinnati Bengals are coming into Sunday Night's game with disappointing starts to their respective seasons. Pittsburgh, like the Bengals, are losing games they should win while not being the superior game-closers they've historically been characterized as. Injuries, fourth-quarter concerns, it's all compounding the overall disappointing 2-3 start within a season that's young and a conference that's there for the taking.

Neal Coolong, the site manager at the excellent and well-written SB Nation site Behind The Steel Curtain, sits down with us, not so much to prep us for the Sunday's game, but to give us an idea of where the Steelers are right now as a team.

When we think Steelers, we think of a team that should beat those teams that they're expected to beat. Yet the Raiders and Titans put together game-winning fourth quarters.

Neal Coolong: I get the feeling in the fourth quarter like it's early Sunday morning, I'm 8-years-old, and I'm hiding in the basement, hoping my mom doesn't tell me to come upstairs and get ready for church. Maybe if I just don't do anything, she won't notice, and will forget the whole thing.

That's how the Steelers defense looks in the last 15 minutes. There are 11 guys waiting for each other to stand up and make a play. No one's doing it. It has nothing to do with the opponent anymore. It's happened in every game but one - the Jets, and that was mostly due to the fact Mark Sanchez couldn't hit water if he fell out of a boat.

Is it the lack of a running game to take control of the fourth quarter?

NC: It's partially the lack of ability to run the ball to close games out - something that happened in their two wins. If the offense didn't score at the end, the Steelers didn't win. The defense failed to stop four of five teams in the fourth quarter, and the offense failed to win the game at the end in three of those five. My opinion, it's more on the fourth quarter defense.

Over the offseason Mike Wallace held out on a restricted free agent tender and Antonio Brown scored a nice contract. Yet Wallace is having a standard Wallace-like season. It doesn't seem like the contract issue has been a distraction.

NC: I'd agree, it definitely doesn't seem like there's an issue. At the same time, if you and your girlfriend break up, and after a bit, she starts dating one of your best friends (i.e. not giving Wallace an extension but instead, giving it to Antonio Brown), you've got two options; you can beat the tar out of him, knowing you'll still have to be around him all the time, or you can put on as good a face as you can, and hope to pick up the sympathy of her hot friends who are able to give you much more (take that however you'd like for the sake of the analogy). 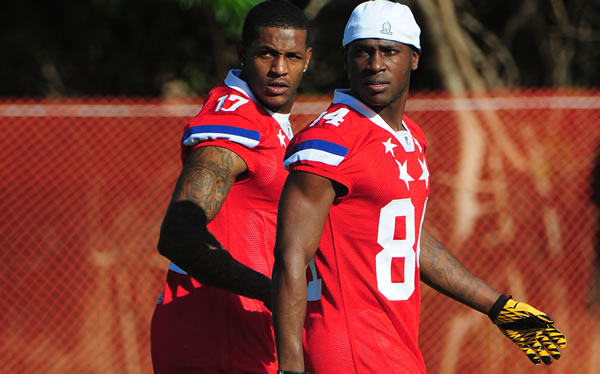 Wallace is in a contract year. The Steelers have the leverage of the franchise tag, but the cap hit that would create may end up being too large. I really don't know what they'll do with him - extension, tag or let him go in free agency. Either way, Wallace has to prepare himself for the possibility of moving on next year, so he's going to do everything he can to maximize his value, and a big part of that is going to be avoiding anything but pleasantries when it comes to Antonio Brown and his contract.

Is there any word that Wallace will get something during the offseason, or do you project that he'll hit free agency this year?

NC: There will be so many things up in the air with this franchise this offseason, and while this clearly is one of the biggest questions, I really can't say. My guess would be they'll find a way to tag him. I used to think they'd take this route but have to cut a few more veterans to be able to do it. Now, I think those veterans are showing through their play it'll be tough to count on them for another year.

It's nearly a guarantee quarterback Ben Roethlisberger will get an extension in order to free up some money, and with what appears right now to be the imminent releases of James Harrison, Brett Keisel, possibly Ike Taylor, it may create enough space to slap the tag on him. Or maybe even give him an extension, I don't know.

Knowing what you know right now, including the shockingly mediocre records en masse within the AFC, are the Steelers built for another playoff run?

NC: My honest-to-God feeling is that they are. There are a few issues that they need to fix on both sides of the ball, but this is a veteran team with a large chunk of young guys without much experience. Those groups are blending together on the field, and the team doesn't have a great sense of itself right now.

The example I'd use is linebacker Lawrence Timmons. He wasn't doing much of anything through the first three games, but starting in their Week 5 win over Philadelphia, he's become much more noticeable. I think he just needed some time to adjust to the post-James Farrior Steelers defense, and learning how to play with the guys around him. 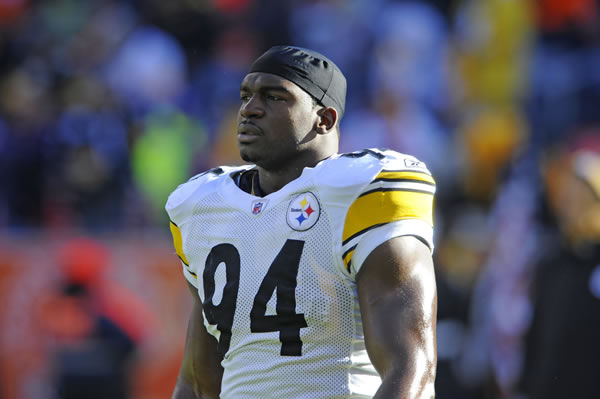 Maybe I'm rose-colored, but I think we're going to see a few more guys flick the switch and this team will play much better over the second half of the season.

Feel free to hang onto that one and mock me later if it doesn't work out.

Like you said, too, the AFC, right now, appears very mediocre. Who's the class of this conference? The same Baltimore team that was yet another Jason Garrett clock management fiasco from blowing a 4th quarter lead at home? Houston, who was demoralized by Green Bay at home after the Packers' sole game plan was to pick on Brian Cushing's replacement? New England, who's only chance to score on offense is to run football's equivalent of a run-'n-gun offense in basketball, thus wearing out their mediocre defense? I don't see how any team is out of anything in the AFC.

Rookie guard David DeCastro, a predraft favorite among Bengals fans, reportedly had an auspicious training camp and earned a spot as a starter due to injuries on the offensive line. He's eligible to come off IR in Week Nine. With the offensive line being with injuries this year, his return has to be welcomed.

NC: I wasn't ever sure if the reports coming from camp weren't more planted information from his coaches in an attempt to fire him up. It just seems odd to me, especially with such a veteran group, and Roethlisberger openly supporting the incumbent, Ramon Foster, they gave DeCastro the starting job so quickly if he was looking so average in camp. He didn't win the spot due to injury (kind of ironic but Foster's been the healthiest lineman over the last few years), but obviously lost his due to injury.

The fact is he's clearly the superior athlete to Foster, and that athleticism will allow the Steelers to pull from either side of the formation - not something many teams get to do. As far as his return, I think most are excited to see the guy who was, without question, the most popular Steelers draft pick in decades, make his debut in what should be an outstanding career.

There's a general pall of pessimism around SteelerNation due to the bad start, and some won't see DeCastro's return as an indication of anything significant. It may not be, either. He is a rookie, after all, and I, for one, have tempered my expectations accordingly.

Is there a growing sense of frustration with Troy Polamalu's injuries?

I remember watching the Steelers Thursday Night season-opener against Tennessee in 2009, coming off a Super Bowl championship season. It was kind of an ugly game. Polamalu made a huge interception early, but had his knee rolled over in a pile-up by halftime. He left the field and didn't play again for the rest of the game. The Steelers pulled out a 13-10 win in overtime. I left that evening thinking something just didn't feel right about this team, and that was the lack of Polamalu. 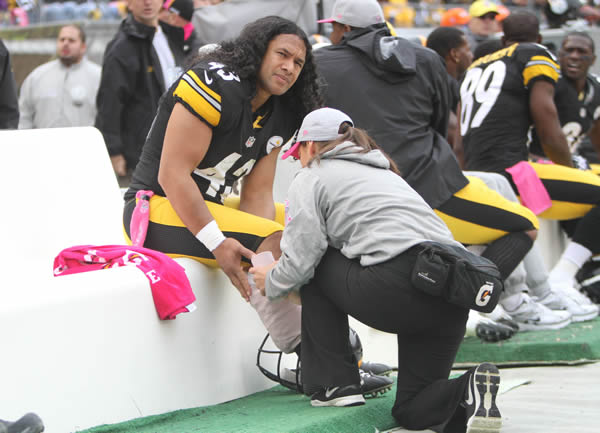 Then in dawned on me all the epic plays he's made over the years are going to start taking their toll. Street Clothes Troy is going to be seen as often as Inhumanly Explosive Playmaker Troy. He's come back before and performed at a high level, only to get injured again. That's the way he's always played, and it's going to break him down eventually, as sad as that is.

What I do know is a calf strain (his current ailment) is not going to end his career. It's a nagging injury, and that needs rest to heal. They're going to take this one very cautiously, and I wouldn't be surprised if he's held out until Week 11 vs. Baltimore.

Green scored a 36-yard TD the first time both teams played last year, but injured his knee on the play and didn't contribute after that. The following game he posted another touchdown and 87 yards receiving. How do you anticipate the Steelers covering him?

NC: Maybe 12 defenders? Force-feed him booze and 5-Ways? Pay people to sing that gawd-awful "Moves Like Jagger" song around him at all times in an attempt to drive him insane?

The Steelers were clear in that they were going to ease James Harrison back after his injury. Instead he's played every defensive snap in the past two games. How's he looked so far?

NC: He's looked pretty solid. Not the same player he was, but through two games, he's already made more of an impact than his primary back-up, Chris Carter, has. He doesn't have the same explosion he used to, but he's only a little over two months from surgery. I think he's going to improve as the season goes.

Now, if they could just get LaMarr Woodley back on the field...he practiced Wednesday, so that's encouraging. Harrison and Woodley have spent about 15 minutes on the field together since the first half of Week 3 last year. Any team that loses at least one (and sometimes both) of their primary pass rushers over that long of a stretch is going to see a decline in production as a unit.