The Cincinnati Bengals shutdown in the second half against the Pittsburgh Steelers.

More than enough books, novels and short-stories have been written to explain the disappointing dull shimmer in Jay Gruden's eye. Comments and analysis blubbering about Cincinnati's receivers were completely blown out of proportion, but such things happen during training camp.

For the third consecutive game, Cincinnati's rushing offense failed to generate more than 80 yards rushing as a team, surpassing the 100-yard milestone only twice this season. They're a collective no-help. Such a non-factor that we're often led to believe that Andy Dalton mutters the words, "Finish Him" as he meanders to the sidelines defeated. 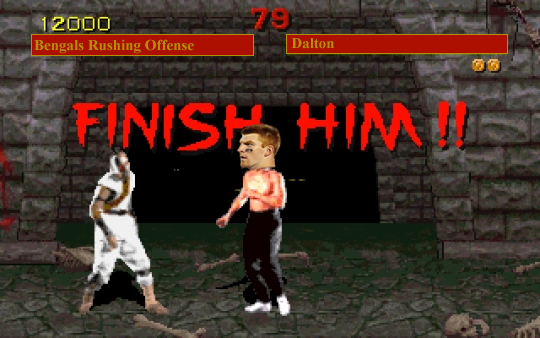 Unfortunately for Dalton, such excuses are becoming empty voices in the midst of Hurricane Bengals Fan; despite the logical and justified conclusion that this team lacks any realistic wide receiver stepping up into a role that would benefit A.J. Green and Andy Dalton.

With 8:10 remaining in the third quarter, during Cincinnati's ensuing possession following Pittsburgh's game-tying field goal and after Brandon Tate returned a kickoff 39 yards to the Bengals 39-yard line, BenJarvus Green-Ellis goes for no-gain, forcing a second and ten. No help. But damn. During a night highlighted by Cincinnati's failures, Brandon Tate averages 36.3 yards per run on kickoffs. At least he played well on special teams. Anyone? (crickets)

Andy Dalton fakes a throw wide right and then dumps the football over the middle to Green-Ellis, who lets the football slide through his hands for an incomplete. During the broadcast, Cris Collinsworth offers this analysis.

"One of the things I found really interesting, we were talking with Jay Gruden. He said, 'sometimes Andy Dalton doesn't hold the ball long enough'.
-Cris Collinsworth during NBC broadcast

On third down Dalton escapes the collapsing pocket, rolling out to the left only to have the football knocked down at the line of scrimmage. Cedric Peerman was called for a hold anyway and the Bengals punt the football. Despite receiving no help on the possession, hard to fault Andy Dalton's lack of production. But at some point these excuses are hollow. The end result is that players need to make plays and when an offense go three and out, players are simply not making plays.

Cincinnati's defense forces a three and out and the offense resumes at their own 14-yard line with 5:01 remaining in the third. Green-Ellis promptly chisels six yards on first down, leaving four yards to go on second and third down. Dalton overthrows Jermaine Gresham on second and panics within the pocket on third down, pulling down the football searching for lanes to escape while the pocket was solidified for another count or two. 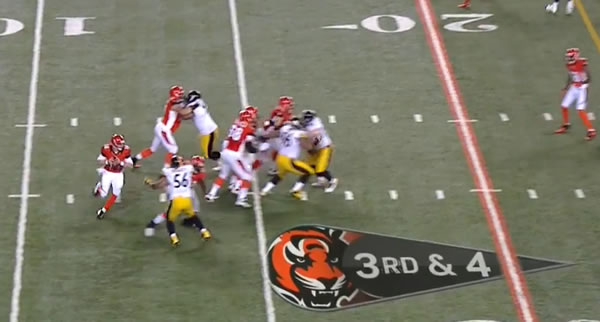 Dalton throws it away out of bounds and the Bengals punt.

BenJarvus Green-Ellis follows a wall developed by Cincinnati's offensive line. Yet his lackadaisical approach to aggressively dive at the point of attack allows defensive players to track and hunt the Bengals running back down. What could have been a good pick-up was a decent four-yard gain with 12:43 remaining in the fourth quarter.

Dalton takes the snap on second and six from the Bengals 39-yard line and quickly targets Ryan Whalen's slant, who fails to hold onto the football after the initial hit from Steelers defensive back Keenan Lewis. Dalton throws a miserable third down attempt in what's assumed as miscommunication.

It appeared that Dalton expected Whalen to cut inside whereas he broke out. Blame the quarterback. Blame the receiver. It doesn't matter. The Bengals have to punt because neither made a play.

Third and three from Cincinnati's 21-yard line with 7:52 remaining in the game. Andy Dalton takes the shotgun snap, counts to three and fires a Dalton-like fastball to A.J. Green, who ran to the 30-yard line on a hitch. Ike Taylor broke the play up and the Bengals are forced to punt.

Though already well into his throwing motion, we'd like to point out Whalen's crossing pattern without a single defender within three yards of the receiver, who is on the first down marker. 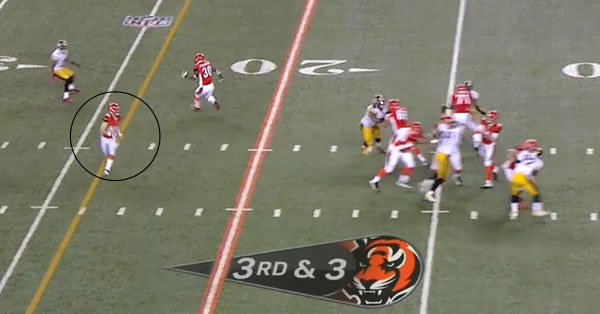 We'll just say it. This offense is a combination of young players still working out this NFL thing. Dalton completed just his 24th game in his NFL career and it's obvious the growing pains are still working themselves out as we're facing a momentary regress.

In the meantime, for those of us demanding change and postseason this year, will probably demand until breaking down into a sweet sob under a pale moon light. Otherwise perhaps now is the time to shift expectations, resolved to watching improvements with an eye for 2013. Stop me if you've heard that before.