Share All sharing options for: Bengals Head Coach Marvin Lewis Know More About Linebacker Than You

Cincinnati Bengals head coach Marvin Lewis is hearing the criticism against middle linebacker Rey Maualuga. Yet he's not really buying into it. When asked if he would change linebackers, Lewis defended Maualuga as much as possible.

"He didn’t play as well yesterday as he played over the past couple weeks and some of it it looks like he’s not playing as well but other people aren’t doing what they’re supposed to be doing and he actually is doing what he is doing most of the time. Unfortunately the last run of the game (a 33-yard gain by Jonathan Dwyer) he decides he is going to be Superman and get out of his responsibility. To the layman who is sitting there watching or whoever is being critical of Rey they are probably being overcritical and no one is going to tell me more about playing linebacker than what I know. There’s a lot of good things he’s doing."

Great. Fantastic. But let's go back to the "last run of the game", where he decides to play the role of "Superman". Mathematically the Bengals were still in the game. With 1:20 remaining in the fourth quarter, the Bengals were down by seven. Pittsburgh had the football on Cincinnati's 40-yard line, needing six yards to convert a third. Hold them and the Bengals have an opportunity to tie the game. Again, mathematically. Realistically, it didn't seem likely since the end of the third quarter.

Nor did any of that matter. 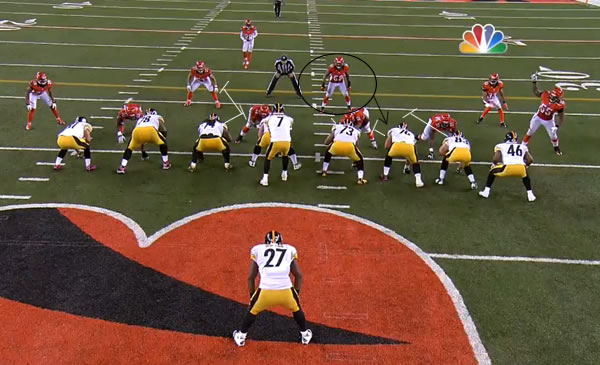 Steelers quarterback Ben Roethlisberger hands off to Jerome Bettis Jonathan Dwyer up the middle. Cincinnati's defensive front seven were easily contained. Geno Atkins was double-downed, Peko was turned and Maualuga basically picked a lane and went nuclear -- until he was blocked by tight end Heath Miller.