The Life And Times Of Marvin Lewis' Poor Red Flag

Marvin Lewis isn't exactly known as the best challenger when calling questionable plays -- either throwing the flag when he shouldn't or holding onto it when he should.

Share All sharing options for: The Life And Times Of Marvin Lewis' Poor Red Flag

[Note: NFL Game Statistics and Information System says that Lewis has called three and overturned one but we can't find it nor remember it for the life of us. So if you're remember, let us know]

So at least one challenge was pretty awful. With 1:08 remaining in the third quarter, Roethlisberger quickly snapped a fastball to Mike Wallace on the line of scrimmage. The wide receiver clutched the football, picking up two yards on the play. During the tackle Wallace rolled over Leon Hall and lost control of the football.

Marvin Lewis threw the challenge flag. Was it a completion? Or was it a fumble? Those were the immediate questions written in my notebook -- next to the production notes of: "VH1 Behind The Scenes: The Life And Times Of Marvin Lewis' Red Flag."

Unfortunately a quick review clearly showed that Wallace had a knee on the ground after making the completion, ending the play. Lewis said after the game.

“It was thought he (Steelers receiver Mike Wallace) rolled over Leon Hall (before losing the ball). Unfortunately, I think his knees touched before he did roll over Leon, so he was down immediately. It was just an error.”

In defense of Lewis, Wallace was the intended receiver and probably thought Wallace just dropped it. It was a recurring theme Sunday night. Just saying. 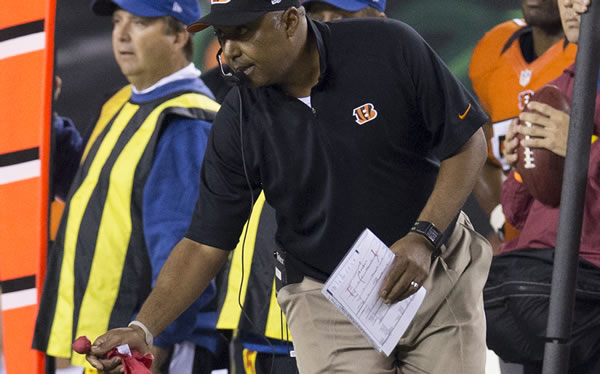 Lewis' second challenge actually made more sense. It's second and ten from the Steelers 32-yard line with 3:14 remaining in the game. Roethlisberger throws a low pass to Wallace, forcing the receiver to grab the low pass near the ground.

Now if the football touches the ground, ruled incomplete, not only do the Steelers need to convert a third and ten, the clock is stopped. And even if the play is upheld, the Bengals would have used their second timeout anyway to stop the clock. So unless Cincinnati needed a challenge for a "questionable" play on the very next snap, nothing was really lost and the result was the same nonetheless.

Lewis' career has been marred with questionable challenges, calling 66 and having only 26 overturned for a 39 percent conversion. Yet for a time he was hitting them with Mike Nugent accurately. Between 2008 and 2009, Lewis challenged 14 plays and received ten favorable rulings, following that up with seven challenges in 2010 and four overturns.

If there's a caveat in all this, it's this. Opposing teams have challenged four plays this year against Cincinnati and only one was overturned; Ravens head coach John Harbaugh questioned a 20-yard reception, when in fact Andrew Hawkins' knee touched the ground after only six yards.

Anyway it's not like the league is dominating the red flag toss outside of Cincinnati, with a collective 32.96 conversion on challenges league-wide. That really didn't help at all, did it?