Share All sharing options for: The Ballad Of Bengals LB Vontaze Burfict

After watching coaches film during Cincinnati's 24-17 loss to the Pittsburgh Steelers, the simplest of comparisons are made between linebacker Vontaze Burfict and Rey Maualuga. Burfict generally steps forward at the snap; Maualuga tends to hold station. Burfict makes snap decisions, identifying a running lane and filling it. Maualuga, as any experienced linebacker in the NFL, instinctively sees the point of attack, yet tends to wait for the opposing offense to reach him. Both players overreact to fakes and misdirection, taking themselves out of the play. Might as well get used to that.

Ultimately the prescribed pulse relates to this: One player appears to be on the decline, while the other has become the darling of Cincinnati. When the final second shun a black hue that illustrated anger and sadness within Paul Brown Stadium, where battles are waged in the souls of Bengals fans, Burfict finished the game with a team-high 15 tackles against Pittsburgh, extending a personal streak of seven tackles or more in five consecutive games; a stretch that included one quarterback sack and two passes defensed.

Pittsburgh started the game with a three-wide formation, Mike Wallace and Emmanuel Sanders to the right. Leon Hall and Terence Newman bunched on the same side, with Hall inside covering Sanders. At the snap both receivers faked a slant before Wallace broke backwards with your traditional bubble screen. Sanders easily contained Newman and right tackle Mike Adams wrapped around for Hall. Big play coming. Nine yards later Rey Maualuga and Nate Clements collided into Wallace to make the stop.

Pittsburgh went cute with the "keep doing it until they stop us" routine. The Steelers show single-back formation with only two receivers on the successive play. This time Wallace was wide left and Antonio Brown flanked the right. The right side of the offensive line broken into zone scheme as Brown stepped back with your traditional bubble screen. Except this time Bengals linebacker Vontaze Burfict swatted the fly named David Paulson, making the sure-handed tackle after a limited two-yard gain.

On the following play, with 13:13 remaining in the first quarter from the Bengals 49-yard line, Wallace goes into motion from left to right. As he approaches the edge of the offensive line, Ben Roethlisberger takes the snap and hands off to Wallace. Burfict sprints past an idle Mike Adams and drops Wallace for a six-yard loss. 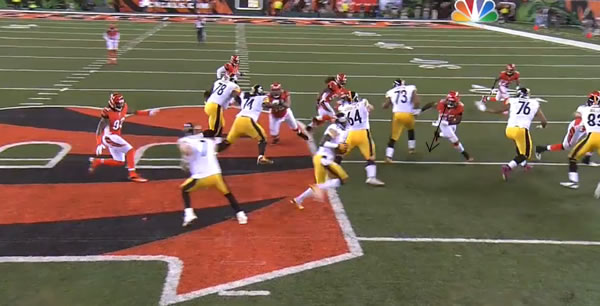 Take a moment to slowly study the second screen grab and note: Burfict, the aggressive young linebacker driving into the whole while Rey Maualuga plays parallel to the line of scrimmage, most likely taking on Ramon Foster's block. Also take note that if Burfict misses his block, there's a lot of green for Wallace to work with.

With over :30 remaining in the first half, Pittsburgh is assaulting the endzone on first and goal. Mike Wallace, flanked left, runs a short crossing pattern with Maualuga's attempted coverage. Let's be fair on this. That's not a good matchup for Cincinnati's defense; though it's possible Maualuga only had one half of the field, leaving Wallace to resume his assignment. Regardless Burfict holds steady in zone coverage, quickly eyeing the developing pattern. 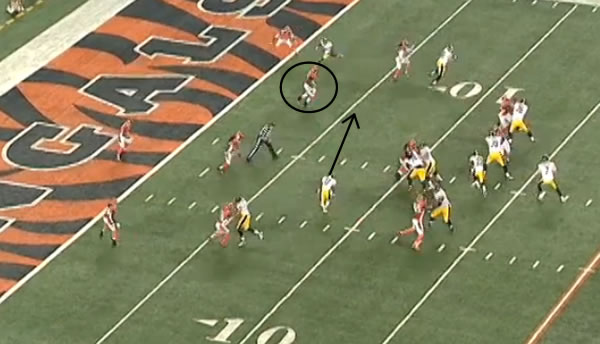 He makes the tackle for a one-yard loss. Here's the thing. Again. If he doesn't make the tackle, the Steelers gain big yards and possibly the touchdown.

Well, they still did on the next play. Roethlisberger scrambles after a pass rush bends around the quarterback, finding Heath Miller boxing out Nate clements in the endzone with Burfict two steps away from making a quality play on the pass. 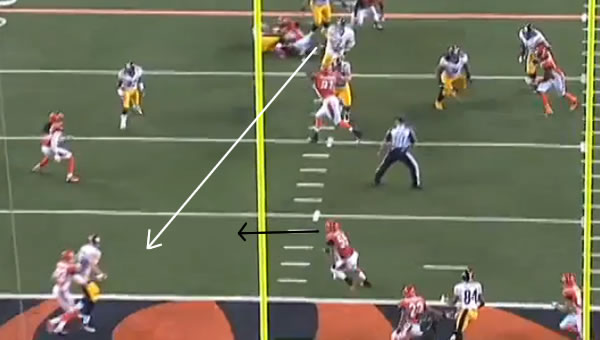 When he's not making the tackle, he's still make a crucial play so another play can make the stop. With 11:25 remaining in the first quarter, Burfict correctly identified the point of attack near the Bengals 25-yard line 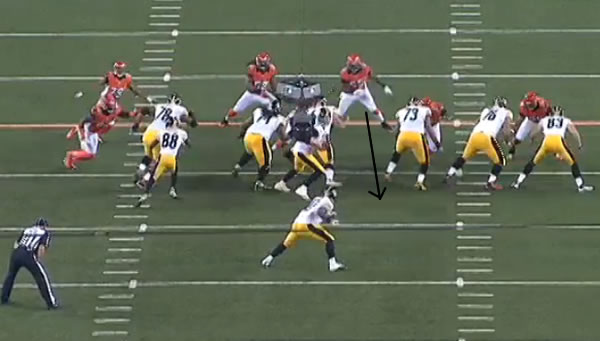 He breaks for the opening. Center Doug Legursky, currently blocking Domata Peko with a little help from Willie Colon, notices. 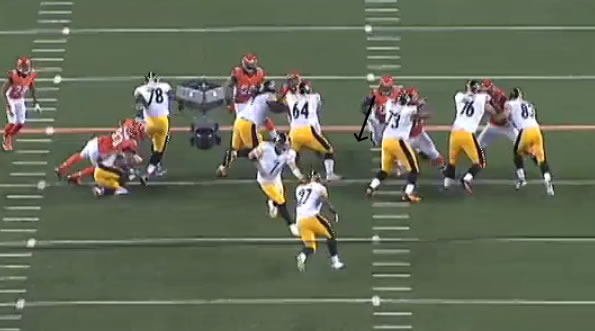 Rey Maualuga approves of the development, perched at his comfortable spot on the lake. In the meantime Legursky leaves Peko to attack Burfict, while Colon notices prey with Maualuga. This leaves Peko wide open to make the stop. 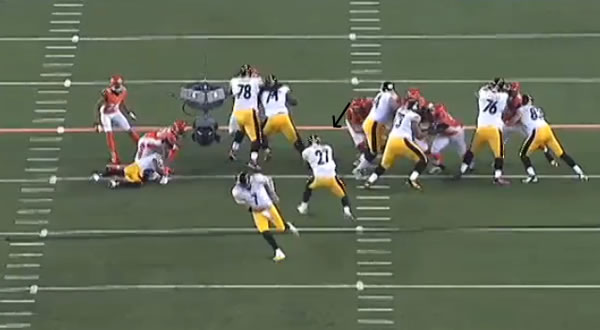 He did. Dwyer only gained a yard, eventually forcing the Steelers to kick a field goal following consecutive incomplete passes.

Yet the mantle of Burfict shouldn't be raised with such lofty plaques, statues and songs of victory in his honor. Not yet at least. He's a rookie and he's making rookie mistakes. Fakes and misdirection eat him alive. With 12:54 remaining in the first quarter, Jonathan Dwyer takes a handoff. Burfict, deciphers the point of attack with a shuttle run before making his attack. Alright. We kid. Somewhat. At the snap Burfict instinctively shifts to his right, near the vicinity at the point of attack. Good so far.

Heath Miller acts as if he's heading out into a route, flaring into the right flats. This causes Burfict a moment's hesitation, tracking Miller out of the backfield just as Jonathan Dwyer receives the handoff. 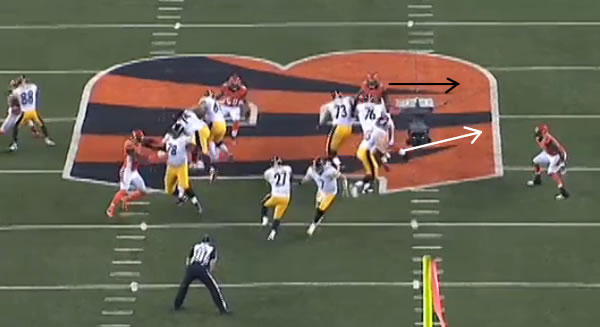 By that time Burfict is out of position and right tackle Mike Adams takes advantage. 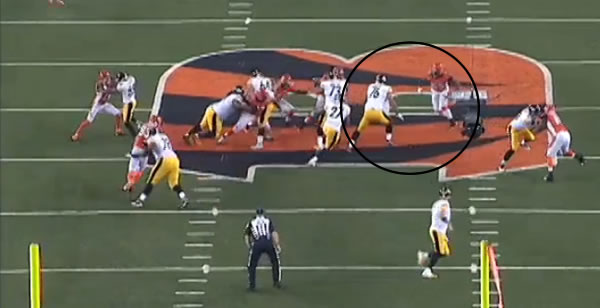 On the other hand it's good that Burfict remains focused enough on his perceived assignment. Afterall Burfict is covered during a fake handoff. Geno Atkins and Domata Peko are each doubled-down, out of the play before one blocker on each defender chips off to reach Rey Maualuga and Burfict. The massive hole allows Dwyer to pick up seven yards on the play.

There's no doubt. Burfict continues to develop into a quality linebacker at astronomical speeds, clearly playing as well or better than any defensive player on this roster.