Bernard Scott's 29-Yard Run The Longest From Scrimmage This Season

Cincinnati Bengals running back Bernard Scott momentarily returned the investment many had in his abilities, patiently waiting for them to surface. And for a brief moment on Sunday, they did.

Share All sharing options for: Bernard Scott's 29-Yard Run The Longest From Scrimmage This Season

It's never fun examining epic disasters like Cincinnati's 17-13 loss to the Miami Dolphins. It's even worse when trying to find reasons to celebrate a mysterious glimmer blanketed inside deep muddy waters near an undisturbed Florida swamp. We shift to the 5:56 mark in the first quarter with the Cincinnati Bengals holding onto a commanding 3-0 lead at their own 28-yard line.

Cincinnati's offensive line employed something not unlike a zone-blocking scheme. Jermaine Gresham, Dennis Roland, Andre Smith and Kevin Zeitler all shifted to their right with an assignment to, at its very simplest, take on the first man that crosses their path and if cleared, cut inward to disrupt backside pursuit. 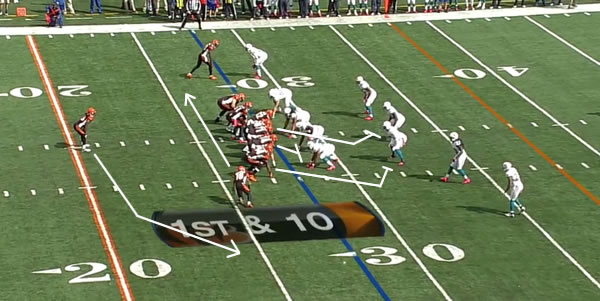 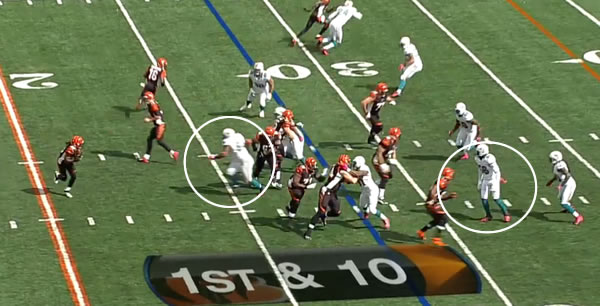 With Starks laying on his stomach having cornerback premonitions later in the game, Scott measured up his point of attack.

Dennis Roland and Andre Smith kicked out their blocks, so the only threat came from two inside defenders. At least get to the line of scrimmage. NOT IN JERMAINE GRESHAM'S HOUSE, we're sure someone yelled at some point on Sunday. Anyway? Anyway, Jermaine Gresham wiped out both defenders with a block not unlike a combination shot in billiards, knocking safety Chris Clemons into linebacker Karlos Dansby, both forcefully removed from the play. It opened the lane and Scott took advantage.

Through the line Scott faces three defenders triangulating his position. 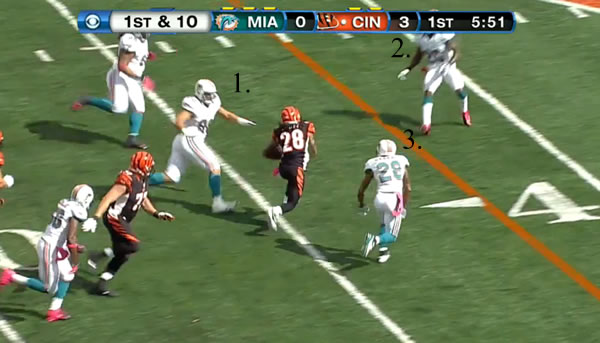 All three defensive players swarm, just beyond the first down marker for the tackle. 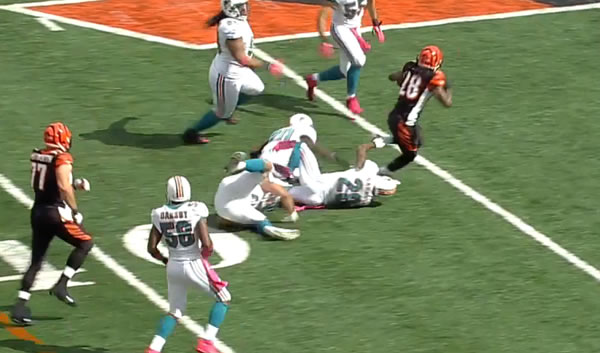 Scott would go on to pick up at least another ten yards after the triple missed tackle, picking up 29 yards total on the play moving Cincinnati from their own 28-yard line to Miami's 43.

It was the longest run on the ground from scrimmage this year (not including the Cedric Peerman fake punt), and the biggest gain on offense against the Dolphins. It was also the most yards rushing allowed by the Miami Dolphins on a single play this season. It was a bad loss and perhaps some of us are taking it especially hard. But it was a damn fine run by a running back that's heading to IR, and perhaps taking off the Bengals uniform for the last time.