A Day At Paul Brown Stadium

Share All sharing options for: A Day At Paul Brown Stadium

At this point, everyone should know how the Bengals game turned out on Sunday. The game was grueling to watch on television. It was even more of a grind if you saw it in person. I’m not here to recap the game for everyone. Cincy Jungle has provided excellent coverage over the past several days, and I hope anyone reading this has taken advantage of the work put into the Bengals buzzkill of a loss against Miami. Since I have yet to see anyone thoroughly comment on how the Paul Brown stadium experience is in 2012, I felt the need to offer up some observations I noted throughout my Sunday.

Sunday was the first Bengals game I've attended since the Bengals lost to the Baltimore Ravens in Week 17 of last season. Naturally, I was excited to see the Bengals live and in person. The fact that the Miami game sold out in a photo-finish fashion further heightened my excitement. Personally, there’s something about attending a Bengals game that’s struggling for attendance. When fans seem lethargic about attending a home game, part of me hopes for a historic performance on the field so the casual fans end up feeling like they missed out on something special. Perhaps I’m being spiteful. Either way, my intentions really come down to the desire for a great experience that I’ll feel fortunate I was a part of.

Once again, I was anxious to see the Bengals in person surrounded by fans supporting our hometown team. I was also intrigued to see what may have changed around Paul Brown Stadium to enhance the fan experience. There have been some nice developments over the past few years. For instance, Paul Brown Stadium began catering to fantasy football fans as of late. They tend to scroll top performers in fantasy on video screens throughout the day. Also, they do a nice little video recap of other NFL games at halftime so that fans can see what’s happening around the league during any given Bengals game. All of this is fairly accommodating, and the Bengals organization deserves some credit for following suit with a lot of other NFL stadiums in creating a much more engaging news feed from around the NFL.

In the past, Paul Brown Stadium had always been fairly lifeless to me. Granted, the fans are the foundation of a great football experience, but the stadium itself seemed to be taking minimal approaches toward engaging their fan base while at the stadium that the fan base built. It’s been nice seeing the measures taken over the years to rally fans around the stadium. PBS has propped up various activity booths that are very family oriented in the "Jungle Zone." I saw a handful of children with their faces painted (and some parents as well) in black and orange. Awesome. It’s also been nice seeing the effort put into expanding the food selection at the games. There was a booth that was catering various sandwich melts cooked fresh by people wearing chef hats, so PBS did a great job of making me assume it was some legitimate cuisine. I opted for some local LaRosa’s pizza but, regardless, the efforts were noted.

The standard PBS vendor menu largely remains intact. I ordered a bucket of popcorn that was slightly stale and not-so-slightly warm. I can’t tell you how many times I’ve returned food at PBS. From rock-hard pretzels to cold cheese with my cardboard nachos, PBS and I haven’t worked well for one another from a consumer standpoint but there are always plenty of acceptable third party vendors like Gold Star Chili and the aforementioned LaRosa’s Pizza to default to.

Aside from the hit-or-miss food venues, Paul Brown Stadium seems to consistently fall short from a technology standpoint. Of course, getting club seating is the way to go for a wide array of meals and HDTV monitors. However, if you don’t have the privilege of being greeted with a smile as you enter through the those guarded club seating doors you’ll have to survive on tube televisions with a subpar signal broadcasting the game as you’re away from your seats. 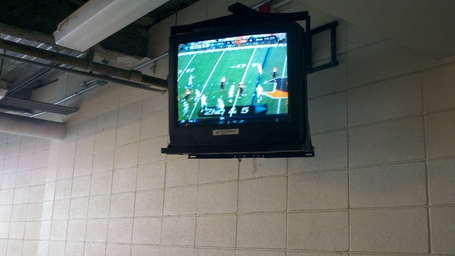 If you’re in the business of selling HD televisions in bulk, I’m pretty sure Paul Brown Stadium needs to be at the top of your prospective customer list.

On a positive note, I’m very pleased to announce that the video animation of a Bengal tiger shredding the opposing team’s flag has been upgraded. Before every game, there would be a video of a tiger stalking its prey in a jungle setting. The tiger would then pounce from the brush and slash a flag bearing the Bengals opponent’s logo. Sounds exhilarating, right? It’s not.

Don’t get me wrong: Fans generally love the Bengal tiger video. Fans went insane when the heavily pixelated tiger rigidly swiped at a heavily pixelated flag. But c’mon - it’s bad. It amazes me that Paul Brown Stadium was built over twelve years ago, yet they presumably paid someone to develop a computer animation that looked like Pixar would have fired someone for creating even twenty years ago. If my cell phone can scan barcodes at the grocery store, there’s no excuse for having such atrocious CGI that looks as if someone is playing Nintendo 64 on a screen the size of a three story building. Fortunately, the video has been upgraded. I won’t spoil it for you, but the new video appears to be outdated by seven years rather than thirty.

The music selection at games has drastically improved from 2011 as well. I no longer have to hear Katy Perry’s Firework in between a kickoff. For the most part, the stadium echoes with more up-tempo songs to get the crowd going; ranging from classic rock, modern rock, and some country music. Also, I didn’t hear Sweet Caroline once. Bottom line: The music selection isn't a distraction, as it was in 2011.

Paul Brown Stadium isn’t exactly a model of the modern sports experience. I’m not suggesting PBS becomes a dome with an 11,000 square foot HD screen overnight. It has become somewhat apparent that small measures of enhancing the fan experience are being taken and I suppose that’s better than regressing. However, I can only hope that PBS takes bigger steps to impress and engage fans over the next few years similar to what Cincinnati’s Great American Ballpark has accomplished. Perhaps a Bengals win on Sunday would have kept me from nitpicking the aesthetics around PBS. Perhaps I may even be taking my taxpayer entitlement too far. Either way, I have to assume that Paul Brown Stadium needs to progress in order to keep its head above the waters of the home entertainment experience, much like the rest of the stadiums in the country. The blackout rule isn’t changing anytime soon, especially in Cincinnati. It will take more than a few vendors grilling with chef hats and a [spoiler alert!] laser-eyed Bengal tiger exploding through an opponent’s banner on the scoreboard, but it’s certainly a start.