A.J. Green gave an honest answer to a leading question in New York that led to him saying that the Giants defense has holes in it. He proved that on Sunday, setting the stage for Cincinnati's blowout.

Their timing on these routes are flawless; especially with New York offering little resistance on the route. BenJarvus Green-Ellis takes a pitch left, picking up five yards and the first down. With 13:46 remaining in the first quarter, Cincinnati has three wide with Andrew Hawkins in the slot to the left. A.J. Green is alone wide right with Prince Amukamara covering -- by roughly ten yards.

Snap. Three step drop. Throw. Green is wide open in a game of pitch-and-catch not unlike father playing with son in the backyard. Green-Ellis pounds the football four yards up the gut, converting into another first down at Cincinnati's 44-yard line.

Now one of Cincinnati's overall issues this year has been an inability to sustain possessions, picking up chunk yardage for easy third down conversions. It's nice to see Cincinnati actually putting together a strong drive, sustained by an accumulation of first downs.

On the fifth play of the game, first and ten from Cincinnati's 44-yard line, cornerback Corey Webster keeps his eyes focused in the backfield, watching Andy Dalton's progressions instead of A.J. Green. We call that the suicide by cop maneuver. Green bounces around the coverage, stretching the field down the right sidelines on a vertical. By the time Cincinnati's all-star wide receiver flew beyond Webster, the cornerback docey-doed around only to find no help over the top; based on his reaction in coverage, he's clearly expecting someone. 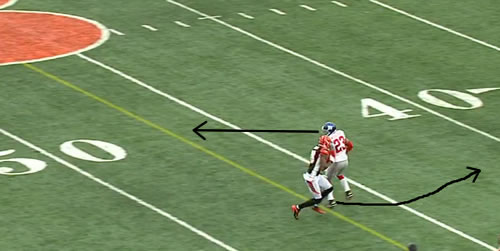 Green's 56-yard touchdown reception gave Cincinnati an early 7-0 lead. And the route was on.