If you live in Cincinnati, having the game on television is a mini-victory in of itself.

It was a hectic week.

For those of you that may understand such things, at my respective day job we implemented an entirely new email system. Roughly around the same time we migrated nearly 10 years worth of emails into that new system, crossing our fingers that the holy loving world wasn't crashing through a digital crater into the core of the planet (or other wierd Total Recall story-telling device). One of our biggest projects as a system administrator during my ten-plus years there. Unfortunately we had a handful of items missed from our dubious routine in recent days.

Obviously with a 4-5 Cincinnati Bengals playing the 1-8 Kansas City Chiefs, we're not going to get much recognition for game of the week with the A-Team CBS broadcast team. But at least after having last weekend's 31-13 win over the New York Giants blacked out, those of us in Cincinnati will get to see the game. But not much else. 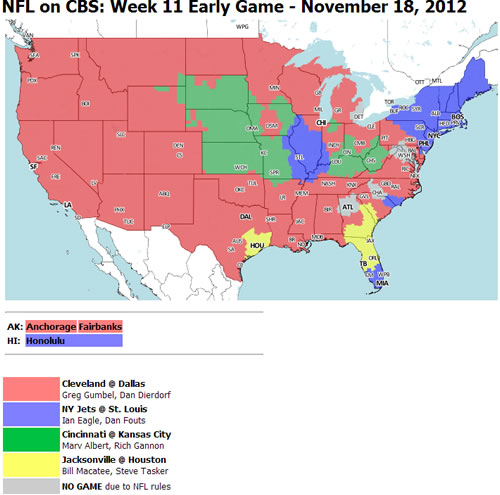 If you live in Cincinnati, this will be the early CBS game, followed by the Indianapolis Colts at New England Patriots. A small pocket in Southwest Ohio will also get New Orleans at Oakland for the late game on Fox; a great opportunity to scout Cincinnati's next opponent.