Share All sharing options for: The Rise Of Bengals Rookie WR Mohamed Sanu

If life were represented with arrows on God's spreadsheet, Bengals rookie wide receiver Mohamed Sanu would have several green-colored arrows pointing northward. Whether it's an injury to Armon Binns or Andrew Hawkins, Sanu has enjoyed an exponential increase of playing time lately in Cincinnati's offense. During his first five games this year (sat during both games against Cleveland), Sanu only participated in 49 total offensive snaps combined. Against the New York Giants and Kansas City Chiefs -- ironically during Cincinnati's two-game winning streak (not that we're actually making that connection) -- Sanu has accumulated 105 offensive snaps, more than doubling the previous five games.

Though only targeted 10 times against the Giants and Chiefs combined, Sanu has posted six receptions for 69 yards receiving and, more importantly, a touchdown in each game. But that's the point. Making critical conversions. Four of Sanu's six receptions against the Chiefs and Giants have converted third and fourth downs, including two in the redzone that led to both of Sanu's touchdowns.

The beauty of Sanu's fourth quarter touchdown against the Chiefs was how much he dominated the route off the line of scrimmage, with a simple out-step that generated separation against cornerback Brandon Flowers. 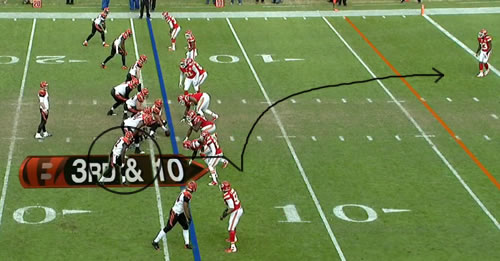 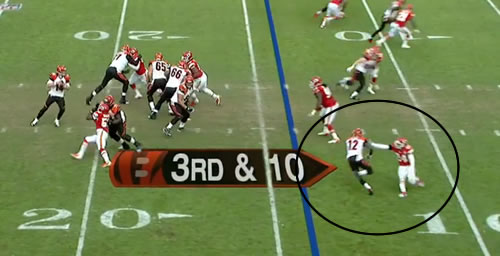 Dalton floated the football to Sanu in stride, catching the pass nine yards shy of the endzone, easily scoring a touchdown to give Cincinnati a 28-6 lead.