Jermaine Gresham played with serious attitude, jawing at Chiefs defenders while playing with an aggression we haven't seen from the third-year tight end. But he had one play against Kansas City that's defined how far he's come.

Share All sharing options for: The Great Jermaine Gresham Third Down Conversion

It's not often that we dedicate an entire post for a single play in the second quarter, unless it directly affected some big-picture meaning in regards to the outcome (aka, a touchdown play). But there is one that we wanted to highlight. A simple third down conversion from a guy that's long since been victimized from huge expectations since being drafted during the 2010 NFL draft.

The Cincinnati Bengals, winning 14-3 by the 4:30 mark in the second quarter, have third and seven from their own 24-yard line. Chiefs defensive end Tamba Hali had given Andrew Whitworth some trouble on Sunday, even generating a quarterback sack at one point. So offensive coordinator Jay Gruden put Gresham outside Whitworth's left shoulder, nearest to Hali. 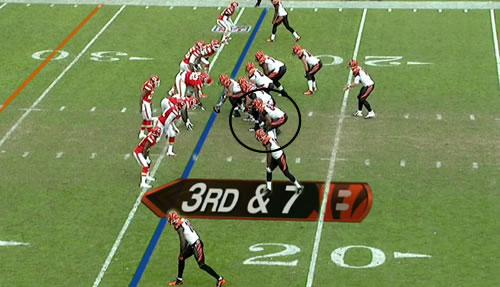 However Gresham didn't just block Hali; he literally shoved the defensive end down, taking him completely out of the play. 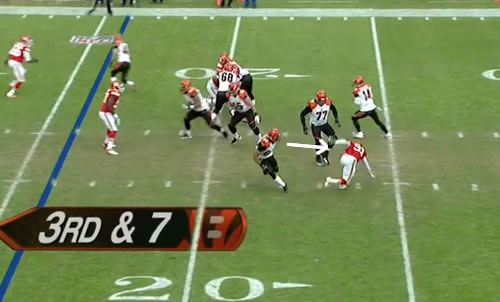 A bored Whitworth stoically-posed himself between Hali and Dalton while Gresham flared out into his route, completely uncovered. At the same time A.J. Green was running an in-route from left to right, forcing Kansas City's secondary to focus on the zone-clearing route. Gresham turned his head, waved, doing everything he can to get Dalton's attention.

Gresham hauled in the football, picking up 11 yards on the pass and converting the third down, sustaining a drive that would eventually result in a touchdown that would give Cincinnati a 21-3 second quarter lead.

Maybe in the end it was a big-picture play that led to Cincinnati's expanding lead. It was an all-around performance of perfection for Gresham, not only removing Kansas City's best pass rusher from the play, but generating a first down on third and seven.

Not bad kid, not bad at all.

Gresham finished the game with 69 yards receiving on six receptions, playing well during a three-game stretch dating back to his 100-yard performance against the Denver Broncos. The third-year tight end is on pace for 69 receptions for 827 yards receiving.