With the Cincinnati Bengals securing a 21-6 lead, the offense slowed down while the Kansas City Chiefs offered no threat in the quarter. The third started and ended with the Bengals leading by 15.

The third quarter during Cincinnati's 28-6 win over the Kansas City Chiefs is best summarized as a thrilling exchange of failed offenses resolved into an exchange of punts. Despite picking up a first down, converting a third and 15 on a 21-yard A.J. Green reception (surprised?), a short third down out-route to Brandon Tate went incomplete and Kevin Huber punted. Neither offense started beyond their respective 20-yard line, but once the Bengals crossed midfield.

With 3:27 remaining in the second quarter, Bengals cornerback Dre Kirkpatrick lined up as the right gunner from the Chiefs 39-yard line during Huber's second punt in the quarter. While Kirkpatrick shifted to his left during his Olympian sprint down-field, Huber angled his 35-yard punt left, perfectly nailing the two-yard line; an accurate kick not unlike a golden shot in Tiger Woods' video games series. As it ricochets off the ground, the football nudges into Kirkpatrick's diving chest.

The football bounces away from Kirkpatrick, toward the field of play... 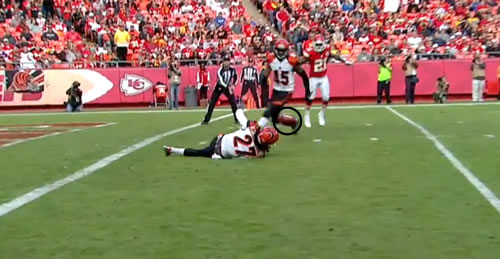 ...where the cornerback reaches out and secures the football at the four-yard line.

Kansas City would pick up a first down, but no more, punting the football away.

As for Kirkpatrick, the rookie cornerback played 25 defensive snaps on Sunday.