My Arrowhead Experience During A Bengals Chief Victory

Cincy Jungle writer Andrew Miller spent the past weekend in Kansas City cheering on the Cincinnati Bengals. During his time, he met some great fans, enjoyed a great stadium, and witnessed a great win. Here's his take on his time at Arrowhead stadium.

Share All sharing options for: My Arrowhead Experience During A Bengals Chief Victory

Cincy Jungle has done a fantastic job of recapping every conceivable aspect of the Bengals victory against the Chiefs. Rather than delve into what I witnessed on the field Sunday, I'd rather reflect on the experience of an away game as a Bengals fan.

Last year around this time, I was able to travel to Baltimore to visit a friend of mine and subsequently spend a Sunday afternoon watching the Bengals face the Baltimore Ravens at M&T Bank Stadium. At that particular game, I was timing my trips to the bathroom to ensure that I wasn't traveling without a buddy system in place, especially if the Bengals had just scored a touchdown. 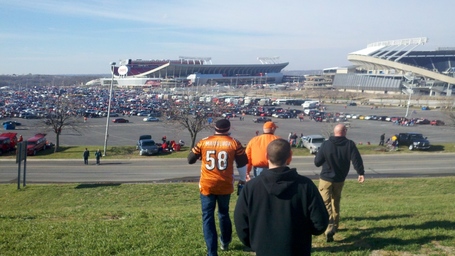 This year I took a trip to Kansas City, and I can tell you that my environment was markedly different. Sure, the Chiefs aren't a division rival. Yes, the Chiefs have a fanbase that is evidently broken, much like we as Bengals fans were in 2010, or 2008, or 2007 (you get where I'm going with this). To say that I could relate, even sympathize with Chiefs fans is a bit of an understatement. Maybe it was the energy I was exuding after years of disappointment. Maybe it was just the Chiefs fans in general, completely unfazed by a non-division rival within a stadium built for a team that has pumped out downtrodden fans for the majority of the last two decades. Either way, we got along.

Not only were Chiefs fans a cordial bunch, their stadium was impressive both aesthetically and simply due to the accommodations for fans visiting the stadium. When I entered Arrowhead, I was handed a folded one-sheet that listed both the Chiefs and Bengals rosters in color. It was a simple idea presumably backed by advertisers, but it left me wondering why Paul Brown Stadium couldn't conjure up a similar measure of literature for fans. Even if the Bengals front office were pinching pennies, I can only assume the handout didn't cost Arrowhead a dime due to the advertising plastered all over the other side of the printout. 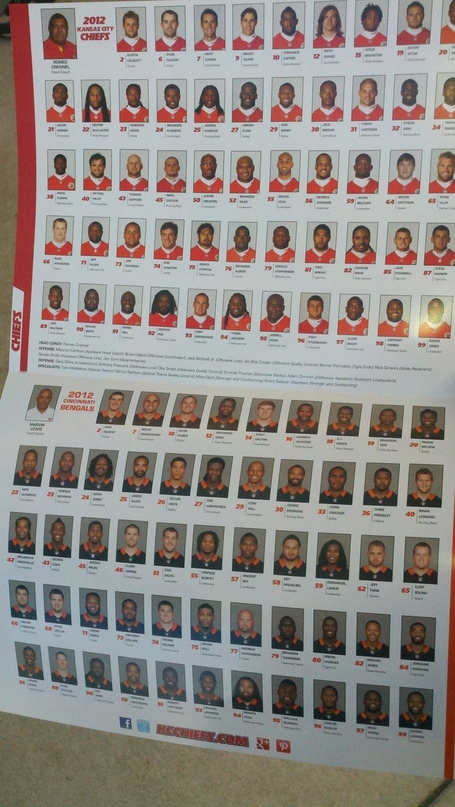 Simple? Yes. Effective? Absolutely. Granted, the Bengals offer programs at a cost, but I'd have to believe that fans will buy game programs regardless of a summarized roster sheet due to the expansion of details that programs provide.

Over $350 million was invested in renovating Arrowhead stadium roughly five years ago and it shows. Both end zones feature impressive high definition screens and the entire stadium has HD screens in almost every direction you turn as you walk around the stadium for concessions. 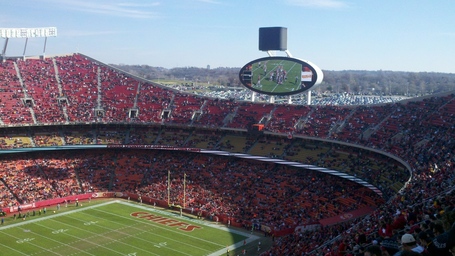 TV timeouts are rarely wasted in Arrowhead. One of the most memorable moments was when Corporal John Eichenberger was given a mortgage-free home for his service to our nation with the United States Army. Corporal Eichenberger suffered injuries in Afghanistan which resulted in a leg amputation, and he was informed of his new home for the first time on the field that afternoon. The moment was extremely moving. I asked a few Kansas City fans around the stadium how often they witnessed gestures of such magnitude during a football game and everyone responded that it was the first that they had seen it occur, but nonetheless it was a very notable moment at Arrowhead stadium.

The game itself capped off a very memorable experience. Even though Chiefs fans were experiencing yet another crushing loss, it didn't detract from my enjoyment of a Bengals victory at all. The game was hardly filled out (though sold out), and there were plenty of Bengals fans visiting the game. As the Bengals orchestrated an impressive win on both sides of the football, I was consistently greeted with cheers of "Who Dey!" throughout the game. When A.J. Green caught his insanely impressive touchdown, the corner of Arrowhead with direct view of A.J. cheered over a perceived out-of-bounds play, but when the gigantic football-shaped HD screens replayed the catch it felt like half the stadium roared with celebration. It certainly didn't feel as if Bengals fans were outnumbered on Sunday.

Even Chiefs fans were proactive in having a conversation about the Bengals for sheer love of the game. I spent some time with a Chiefs fan that was wearing a TCU hat. Turns out he attended TCU when Dalton did, and we spent several minutes discussing Dalton's college career and his subsequent success in Cincinnati. Of course, Chiefs fans also enjoy a cynical perspective of the Oakland Raiders. There was plenty to discuss regarding Oakland, as you could imagine. Needless to say, it felt as if I was in good company in Arrowhead stadium.

I spent last weekend in great weather, a great stadium, and a welcoming fanbase. As a Bengals fan, I'm not sure how much better it could have been at an away game. It was nice barreling across I-70 knowing I was returning to Cincinnati with the Bengals at .500 on the season. Pretty soon the Kansas City barbecue would digest and Carson Palmer would be less than a week away from arriving in Cincinnati as well. In the meantime, I'm enjoying the homecoming.

There's been more chatter of "playoffs" since I was last in Cincinnati. It's a little too soon for me to envision playoffs, personally. Either way, I'll be thankfully watching Bengals games uninhibited by a paper bag on my head.