Oakland Raiders at Cincinnati Bengals: All You Need To Know

A collections of stories, previews and information heading into Sunday's game between the Cincinnati Bengals and the Oakland Raiders.

Share All sharing options for: Oakland Raiders at Cincinnati Bengals: All You Need To Know

PLAYOFF HUNT CONTINUES (BUT YOU WOULDN'T KNOW IT)

Anthony Cosenza countered a point that I made earlier this week; that the Carson Palmer returns to Cincinnati isn't that interesting of a story. It's a fair point and well-argued by Anthony. He wasn't the only one either. Mojo and I were back and forth for about an hour on Saturday. But no matter the outcome of Cincinnati's game against the Raiders this Sunday (SUNDAY, SUNDAY!), Palmer will be an afterthought to a far more important and big-picture storyline:

A win and the Bengals are 6-5, one step closer to joining the postseason picture for the first time since Week Five. A loss and you can group the Bengals within the "needing a desperate miracle" class currently developing with losing records. Whatever happens, the secondary afterthought will be "...and we did it/were beaten by that ass-hat Carson Palmer."

And that's the way it should be.

By why? With everything that he did, why isn't that big of a story to me personally? Frankly there's two reasons. One, everything that's happened since then has significantly reduced the bloodlust I personally had for Palmer. Seriously. You're more happy today with Andy Dalton throwing to A.J. Green and the extra draft picks; one of which led to the team acquiring right guard Kevin Zeitler. Hell the Bengals have a winning record since Palmer refused to play another snap in Cincinnati. Shouldn't we be thanking Palmer?

Would it be nice if Geno Atkins drives Palmer into the ground for a quarterback sack? Well, no. Because that's a penalty. But yes, it generally will feel damn good. Would it be nice that the Bengals beat Palmer? Yes. Why? Because they're 6-5 and that much closer to the playoffs.

Frankly we've moved on. The hurt has was absorbed with a postseason berth and a far more optimistic future than what he left us with. Hell I'm grateful for what Palmer did. So let me be the first to say, "Thank you, Carson. You're ass-hattery has made us a far better team that what we were while you were here." Who Dey.

NO TELEVISION FOR YOU

For the second time this month the Bengals failed to sell enough tickets by the (holiday-extended) deadline, announcing that this weekend's game against the Oakland Raiders will be blacked out in Cincinnati, Dayton and Lexington, Kentucky. Cincinnati played three home games in November, hosting the Denver Broncos, New York Giants and Oakland Raiders. It wasn't a month that we expected the ticket office to struggle.

After this weekend, the Bengals have two home games remaining. The next one on December 9 against the Dallas Cowboys is already officially sold out, however the regular season finale against the Baltimore Ravens game isn't. And it's entirely possible it won't be, even if the Bengals need a Week 17 win to make the postseason. That was the situation last year and if not for a buy-one-get-one free ticket promotion, we doubt that game would have sold out either.

It is what it is.

Andrew Hawkins is expected to miss his second consecutive game this weekend with a knee injury that was apparently significantly understated. On the other hand Cincinnati is expected to get starting safety Reggie Nelson and wide receiver Marvin Jones back, both of whom missed several games recently.

Raiders running backs Darren McFadden and Mike Goodson are already listed as out, as is defensive tackle Richard Seymour.

Odds have been wide-ranging for this weekend's game against the Oakland Raiders, opening with the Bengals as six-point favorites. Likely due to injuries with the Raiders, that line has expanded anywhere from 8.5 to 9.5.

With the Bengals being blacked out on Sunday, the broadcast coverage is thus reduced significantly to a handful of states on the west coast. 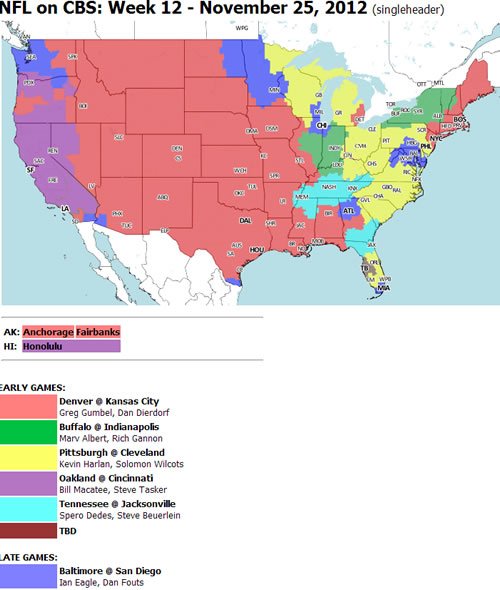 THIS WEEK IN PRACTICE AND INJURIES