Emerging Running Game Changes Everything For The Cincinnati Bengals Offense

The Cincinnati Bengals running game is beginning to find their stride and that means Cincinnati's offense could become a potent machine.

Share All sharing options for: Emerging Running Game Changes Everything For The Cincinnati Bengals Offense

The Cincinnati Bengals rushing offense has officially awoken from the graves of the dead, generating 221 yards rushing during Cincinnati's 34-10 win over the Oakland Raiders on Sunday. It's the first 200-yard performance by the Bengals since November 29, 2009. And it's the most yards rushing in a single-game as a team dating all the way back to December 14, 2003 when Rudi Johnson led the team with 174 yards, with help from Corey Dillon, Brandon Bennett and Peter Warrick.

If you combine their performances against the Kansas City Chiefs and Oakland Raiders, the Bengals rushing offense has generated 410 yards rushing in both games combined. Are you kidding me?

On Sunday it was a combination of BenJarvus Green-Ellis (129 yards), Cedric Peerman (61), A.J. Green (21), Mohamed Sanu (5) and Andy Dalton (5). Yet it was the offensive line that took care of business on Sunday, driving the Oakland Raiders off the line of scrimmage with critical blocks from rookies and even wide receivers. It's football.

With 10:20 remaining in the first quarter, the Bengals have third and one at the Raiders 49-yard line. Everyone knows that BenJarvus Green-Ellis is going to pound the rock inside, powering his way for the first down. Cincinnati targeted the C-gap on the right, aiming the point of attack behind Andre Smith and Dennis Roland, obviously a jumbo package with Jermaine Gresham outside Roland's outside shoulder.

Kevin Zeitler and Smith doubled-down on defensive lineman Christo Bilukidi. Once Smith shoved the Raiders defensive tackle inside where Zeitler held inside contain, he chipped off the block to seal linebacker Miles Burris inside. Dennis Roland contained Lamarr Houston outside while Chris Pressley made the critical block, wiping out inside linebacker Rolando McClain before the linebacker could congest the point of attack.

A crease opened for BenJarvus Green-Ellis, who exploded through the line of scrimmage, sprinting 48 yards before he was tackled at the .0001-yard line for the first down, scoring the first touchdown of the afternoon on the following play.

By the second quarter, Cincinnati had already exploded with a 14-point first quarter, putting together a sustaining drive that began with 13:27 to the 8:48 mark during the team's tenth play on the drive. The Bengals have double-tight formation with Cedric Peerman in the backfield on second and eight on Oakland's 36-yard line.

The offensive line played more zone-blocking on the play, allowing Cedric Peerman the benefit to improvise and find running lanes. 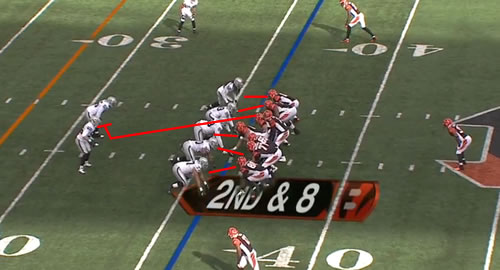 Peerman took the handoff, identifying Smith, Robinson and Whitworth's blocks, all of whom migrated inside. Peerman made his one-cut in the backfield and turned upfield, sliding behind Trevor Robinson's driving block while the defensive line as a whole was seriously manhandled by Cincinnati's offensive line. 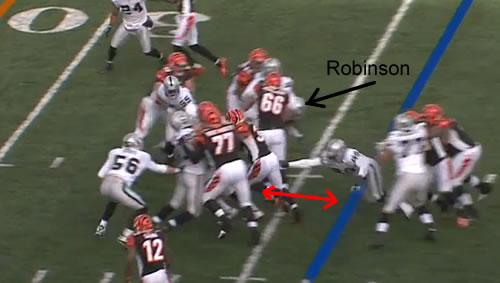 By this point Peerman clicked the nitrous button, outrunning linebackers and deflecting at least two downfield tackles from the Raiders secondary. Peerman gained 31 yards on the play, reaching Oakland's five-yard line. The Bengals would take a 21-0 lead on Mohamed Sanu's five-yard touchdown reception.

Fast forward to the 15-minute mark in the fourth quarter, with the Bengals leading 24-10 and the Raiders at midfield. Manny Lawson strips the football out of Carson Palmer's hand and Rey Maualuga recovers on Oakland's 46-yard line. One play following a six-yard run sets up a second and four from the Raiders 40-yard line with 14:29 remaining in the game.

Dalton hands off to Green-Ellis, this time targeting the left edge. Andrew Whitworth valiantly sealed the outside with a "do everything possible" block on defensive lineman Matt Shaughnessy. 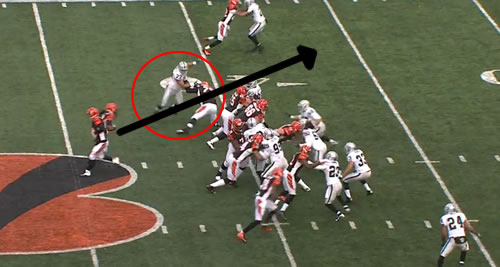 Clint Boling and Trevor Robinson neutralized Desmond Bryant and Philip Wheeler respectively, with Boling flipping his guy inside, essentially creating a wall against backside pursuit. Yet what really made the block work was Marvin Jones' block on Ron Bartell, giving BenJarvus Green-Ellis a free lane to sprint down the left sidelines.

Green-Ellis picked up 38 yards to the .00001-yard line. However Cincinnati was unable to score a touchdown, electing to take the field goal and extend their lead 27-10.

If Cincinnati's rushing offense is finally alive and here for the long-term, there's a good chance that the Bengals could become one of the league's most potent offenses. Consider for a fact that opposing defenses literally stare at A.J. Green with suspicion before it enters their mind that another Bengals player could make a play.

"After the first part of the game," said head coach Marvin Lewis after the game, "(the Raiders) decided they were not going to let 18 (A.J. Green) beat them anymore. Ok then, so let’s just run the football. BenJarvus (Green-Ellis) is running up through there, but nobody is home because everybody is standing by 18. We just have to keep going and do things correctly. Linemen love to run the football; that gets them excited."

The scary part is that Green generated over 100 yards receiving, even with the attention he was receiving. Can you imagine what happens when defenses balance out their attack?

"We’re starting to find the way we like to play and that style, that attitude is key and we've got to continue to do it," said Andrew Whitworth. "This isn’t enough. We feel like the streak we had in the middle of the season is purely and solely because we felt too good about ourselves and relaxed. I don’t think this team is like that right now. We’re ticked off and we have a chip on our shoulder and we’re out to prove who we are and what we set out this season to be. We’ll keep putting the throttle down, and practices will be better and more heated and we’ll have more successful for it."