Five Bengals That impressed Against Oakland

Yet another dominating performance by our Cincinnati Bengals; this was such a team effort that it made it hard to find five players that have impressed me. New expectations are now set for this team as they keep winning. I used this opportunity to look at a few players that have quietly elevated their performance to match the rest of the team and threw in another player that has been previously ‘above’ this list.

Share All sharing options for: Five Bengals That impressed Against Oakland

Rey Maualuga looks slim and quicker over the second half of this season. He's still going to miss tackles, take some risky angles and have trouble shedding blocks; that's been in his scouting report since he left USC. It's the flashes of improvement in these areas that gets me excited. Are we seeing growth, maturity or leadership emerge? Maybe we're not there yet, but something is noticeably improved with the middle linebacker. Let's look at a couple plays that stood out to me:

This appears to be a zone run to the left with the right guard taking Rey Maualuga on the second level. He has struggled in this area throughout much of his career. As Domata Peko gets push into the backfield and Geno Atkins is cleared to the left, a hole is created right in front of Maualuga. He does a nice job shedding the blocker. Look how the Raiders lineman had his arm around Rey; he should've won this easily. 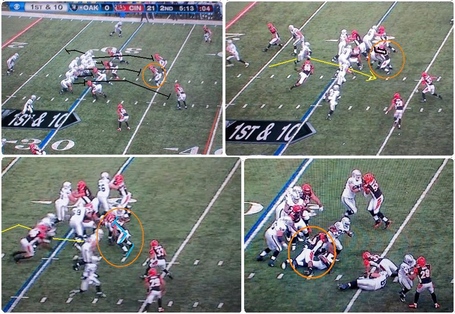 When the runner cuts back into the hole, Rey keeps his arms extended into the chest of the defeated blocker; this allows him to square his shoulders to the line of scrimmage (LOS), bend his knees and set his feet shoulder-width apart, in great position to make this tackle. You'll see in the last picture that Rey attacks at the runner's hips and wraps around his legs; sound tackling and minimal short gain.

The Raiders come out with three wide receivers and the Bengals match with their Nickel (Five DBs) defense. Mike Zimmer calls their most common defensive look; showing "Sugar" in the A-gaps. Look how Maualuga and Burfict line up next to each other with the defensive line spread wide. Add in Reggie Nelson, and you have seven defenders on the line. This causes confusion with the Raiders and Carson Palmer; the Bengals know a quick pass is coming on third down.

At the snap, Palmer looks to dump it to his RB in the flats, but Nelson didn't blitz, redirecting to cover the RB. Maualuga drops into coverage, assigned with the Raiders tight end after Wallace Gilberry's initial hit. Palmer's initial read is now neutralized and Palmer is forced into an early throw to Darrius Heyward-Bey that falls incomplete. I was impressed with Rey's speed, agility and great bump coverage on the tight end. 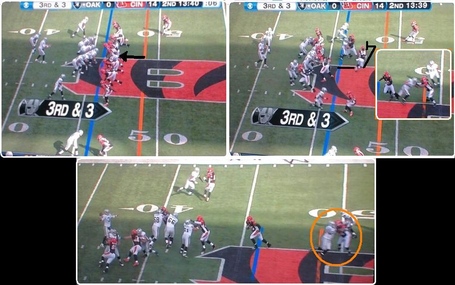 Chris Pressley has become a forgotten man with Cincinnati employing more spread looks since mid-season. Over the past two weeks, the Bengals running game has found it's footing thanks to improved blocking by the tight ends and Chris Pressley. On each one of BenJarvus Green-Ellis' long runs, Pressley had a key block to spring the back for his longest career runs. Josh broke both of those plays down already. Here are two other plays that caught my attention:

This is a play-action fake to BJGE and its Pressley's responsibility to pick up the blitzing linebacker to protect Dalton with his body still turned away from the defense. Not only does Pressley target Miles Burris, he buries him and drives the Raiders rookie a few yards past the LOS.

This is a draw/delayed run to "The Law Firm". Andrew Whitworth and Clint Boling sell the pass and let the Raiders rush wide. That creates a hole between LG-C (The A-Gap), but Chris Pressley must re-introduce himself to Miles Burris and seal him off inside. He fulfills his assignment long enough for Green-Ellis to pick up a decent gain. 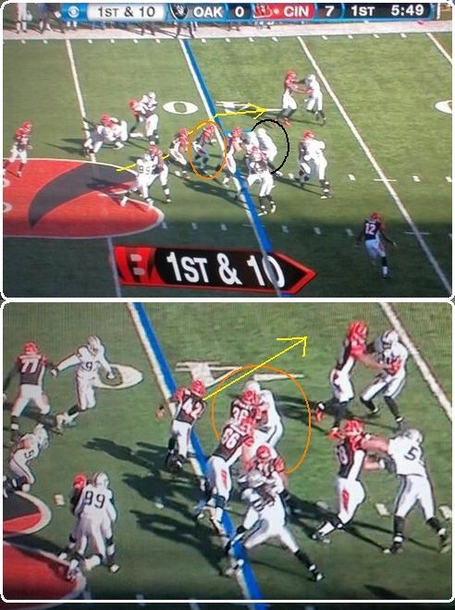 I could write an entire post about the greatness of Geno Atkins. I've been watching in amazement recently. Not only is he the best defensive tackle in the NFL, he's an elite pass rusher and very good run defender regardless of position. He needs to be among Defensive Player of the Year candidates. While he's one of the players that impressed me, we need to take a second look at his defensive tackle partners; Domata Peko and Pat Sims. I've been highly critical of Peko and have heaped praise on Sims. This week, both deserve the praise. Here are a few examples:

Around this time, the Raiders were close to run-out-the-clock-mode and just wanted to get out of Cincinnati alive. Pat Sims showed no mercy here. The center pulled to the left, and the rest of the Raiders offensive line blocked down to the right. This would normally trap the defensive tackle, taking on a blocker without much momentum to counter. Sims didn't slow down; he attacks the right guard's inside shoulder, turning him around, opening a clear path to the running back. The runner cuts towards the pulling blocker and Sims is forced to quickly disengage, and dive toward the the running back's legs. He makes contact, wraps up and twists the Raiders ball carrier to the ground. 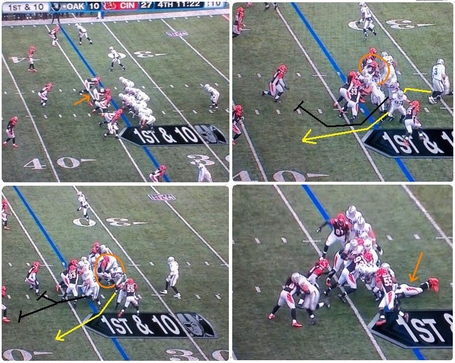 Raiders run a stretch zone to the left. The right guard is assigned to Domata Peko by cutting out his legs, getting him to the ground in order to create a cut-back lane for the runner. As the lineman goes to the ground, Peko keeps his arms extended on the lineman. Peko stays clean, doesn't allow his feet to be taken out and wraps up the running back as he cuts into the hole that Peko was patrolling. 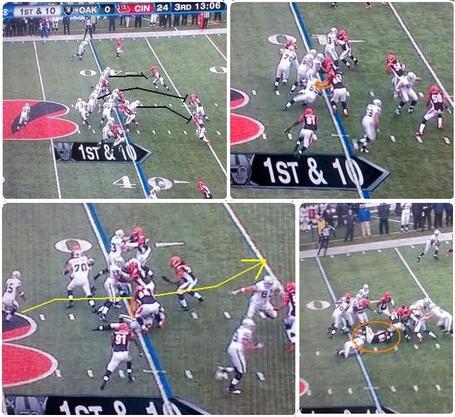 This was my favorite play. The Raiders were getting frustrated with the Bengals stingy defense and decided that going for it would give them their best chance to generate some momentum. Look at the second picture and you'll notice that Domata Peko is the first player moving and sacrificing his body on the play. Everybody knows that low-man-wins philosophy and Peko does it perfectly. He dives into the right guard's legs and completely blows up the point of attack. Tremendous effort on this play. 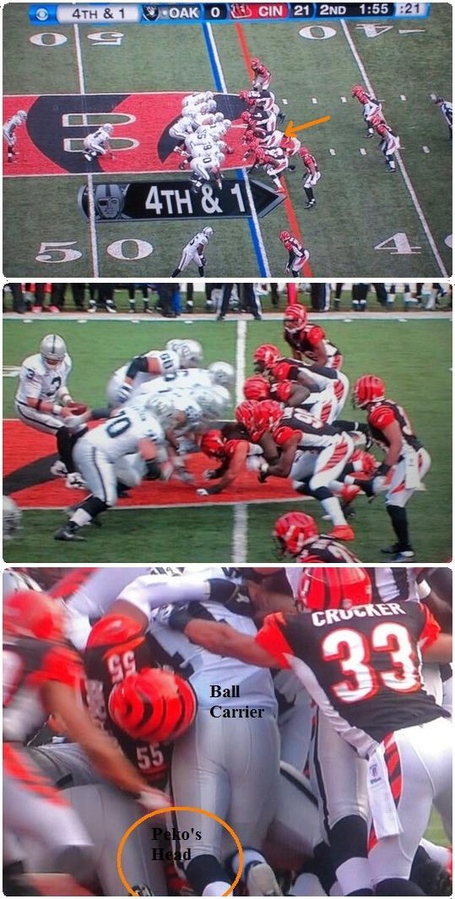