Despite the team losing by eight points on Sunday, the tight end facing tall expectations did his part in a career-game against the Broncos.

Over 13 minutes remain in the third quarter when quarterback Andy Dalton takes the second and eight snap from the Bengals 37-yard line. Denver brings five; three down linemen and linebackers Wesley Woodyard and Danny Trevathan with Elvis Dumervil dropping back into coverage.

Customary to his anxiety in the pocket, Dalton sees that his primary receiver is covered, thus sinking into a more customary freak-out scramble mode looking for A WAY OUT OF THE POCKET.

The unscripted departure actually benefits the Bengals immensely. Dumervil, a defensive player with a natural instinct to rush the passer, is covering Gresham on the underneath cross. As Dalton scrambles out of the pocket by rolling out to the left, Dumervil turns into a shark with the similar scent of quarterback blood in the water. 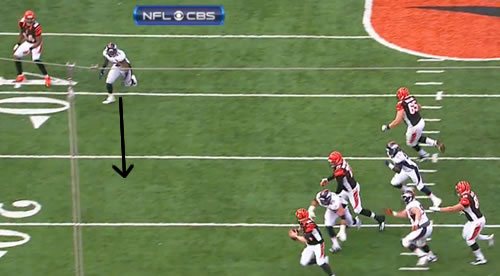 By abandoning his assignment in coverage, it leaves tight end Jermaine Gresham wide open. Dalton sees it and throws it on the run. 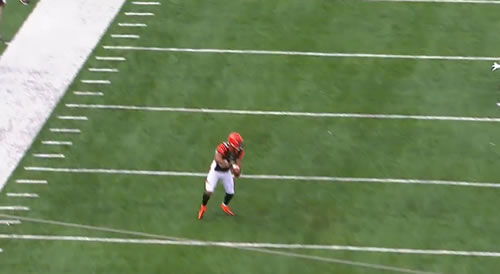 The rest of the play shifted into a combination of teamwork and why so many have generated vast expectations of Gresham, showing impressive athleticism down the sidelines. Andrew Hawkins stalls the approaching Rahim Moore just enough to force the defensive back to slide off the block with an attempted low tackle that Gresham was able to side-step (while tip-toeing the sidelines).

Then you have A.J. Green's effort blocking cornerback Tony Carter while Gresham sprints down the sidelines.

Carter turned into a non-factor.

Eventually Champ Bailey wiped out Gresham's legs at the Broncos 11-yard line after the 52-yard reception, setting Cincinnati up with an eventual redzone score.

Though Gresham's second 50-yard reception of the season was exciting, it was desperately needed in the context of momentum. At the time Cincinnati had just given up a 105-yard touchdown on a kickoff return to open the second half, facing a 14-point deficit.

Despite having a really bad drop earlier in the game during Cincinnati's 31-23 loss to the Denver Broncos, Gresham put together a career game on Sunday. His 108 yards receiving is the first 100-yard game in his career, along with a season-high six receptions. Currently Gresham is on pace to generate nearly 70 receptions for 866 yards receiving.

"He played well," Bengals quarterback Andy Dalton said after the game. "He had the one drop early, and then he came to play. It’s good to see. We need guys to step up like that. He’s making some really good catches. He’s a good part of this offense. When you see him have a game like this, you expect it out of him every week."