The Bengals' playoff hopes are still technically "alive" but their chances of playing in the post season are very slim.

Share All sharing options for: Bengals On The Outside Looking In At Halfway Point Of 2012 Season

Before the beginning of the season, the talk of the town was how great it would be to see the Bengals go to the playoffs two seasons in a row, something that hasn't happened since the '81 and '82 seasons (the 1982 season was shortened due to a strike). The Bengals were coming off a surprisingly successful season and since it looked like a whole new team, why not hope for a new result?

Unfortunately, things haven't quite worked out that way. Now that we're at the halfway point of the 2012 season, the Bengals are sitting in third place in the AFC North with a 3-5 record, have lost four games in a row and they are currently in 12th place in the AFC. Even though the Bengals are technically "still alive" when it comes to a playoff berth, the picture is bleak.

Below is the AFC playoff picture courtesy of CBS Sports: 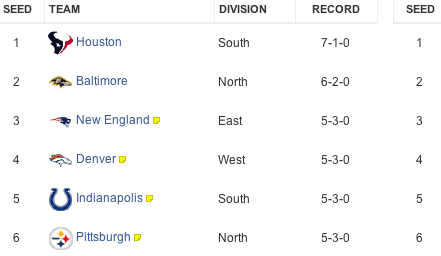 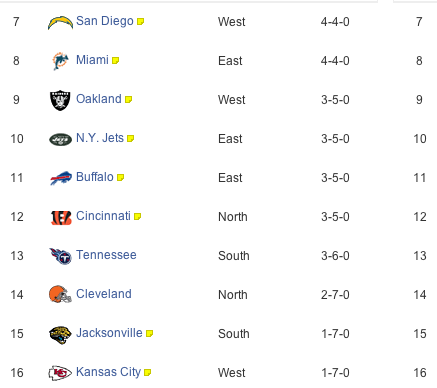 And the explanation of the order:

Basically, in order for the Bengals to get to the playoffs for the second year in a row, they would need to win at least six of their last eight games to back into a wildcard spot, and more than likely they would need to win seven of them to secure a position. That would not only mean beating the Raiders and Chiefs, but beating teams like the Giants, Ravens, Steelers, Eagles, Chargers and Cowboys. Based on the way that they played over the last four weeks, that's not likely to happen.

Stranger things have happened, though, and the NFL can be a funny league. For now, if you feel like holding on to hope, you can based on the fact that it's possible to watch the Bengals play in the post season. If you have lost hope for any chance of a playoff run, I guess I wouldn't really blame you.