Three And Out: A Fourth Quarter To Forget For The Cincinnati Bengals

The Cincinnati Bengals actually took a three-point lead early in the fourth quarter. Then in a series of three plays, that fell apart.

Share All sharing options for: Three And Out: A Fourth Quarter To Forget For The Cincinnati Bengals

+ After Denver scored their 31st point with 3:41 remaining in the fourth quarter, the Broncos short-kicked the football back to the Cincinnati Bengals where fullback Chris Pressley returned the football eight yards to the 30-yard line. Andy Dalton completed a ten-yard pass to Jermaine Gresham at the 2:59 mark, originally marked as a first down but overruled as only a nine-yard gain due to bad placement.

By the time Cincinnati snapped the football again, 2:31 remained in the fourth quarter. Being down by 11 points, time tends to become a precious commodity. So it obviously makes sense when Brian Leonard failed to convert a third and one, the Bengals tried again, picking up five yards on fourth and one, converting for the first down.

Problem was that they killed 31 seconds trying to convert a third and one on two plays. Now it's the two minute warning, advancing the football five yards in the span of 31 seconds while needing two drives to wipe out an 11-point deficit.

Blame Marvin Lewis if you want for questionable time management (he deserves his share), but that's play-calling, the responsibility of offensive coordinator Jay Gruden.

+ Terence Newman intercepted two Peyton Manning passes in the third quarter. The first, which prevented a score for the Denver Broncos, was primarily based on pregame study and coaching, according to Newman.

"They're not a team that does a lot of back pylon fades. I was just kind reading the release of the receiver," Newman said. "The pop pass is kind of a big play around the league, so when he came off kind of slow, I just jumped inside thinking it was going to be an inside pass and it was … the coaches did a good job preparing us for that play."

Later during the game, when the Denver Broncos reached Cincinnati's four-yard line, Newman lined up over Decker on second and goal with 3:41 remaining. Manning took the shotgun snap and Newman jabbed Decker at the line of scrimmage.

Instead of cutting inside, the Broncos receiver does a back pylon fade. You can't make this stuff up.

Decker established the separation on the fade, outperforming an unexpected Newman who had his backed turned to the quarterback until the instant the football arrived. 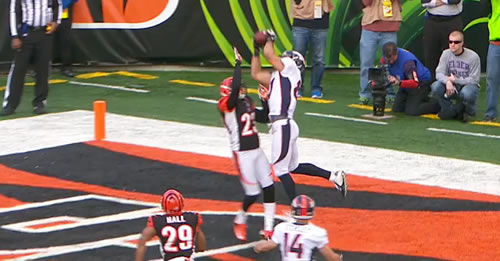 + Establishing a 20-17 lead early in the fourth quarter, the Cincinnati Bengals defense eventually challenged the Broncos into a third and two at Denver's 27-yard line. Eric Decker, lined up wide right with cornerback Newman covering, cuts in two yards after the first down marker.

Manning completes the football with Newman hugging Decker's hips for a sure-tackle. Until Rey Maualuga comes along, knocking Newman off the tackle. 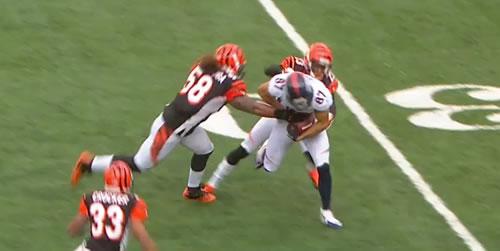 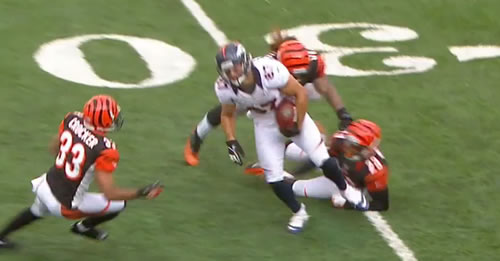 And hey, why not a Chris Crocker missed tackle while we're at it. 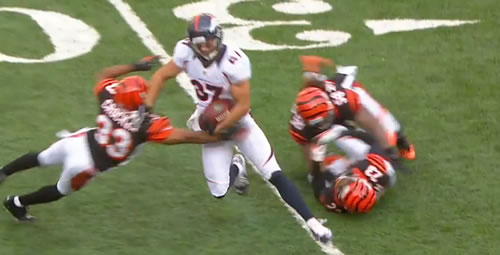 Decker gained 30 yards on the reception. With help from an Adam Jones pass interference in the endzone, the Broncos took a 24-20 lead on a one-yard touchdown pass to Joel Dreessen.