Breaking Down Quarterback Sacks Allowed By The Cincinnati Bengals

Share All sharing options for: Breaking Down Quarterback Sacks Allowed By The Cincinnati Bengals

Threatening, the Cincinnati Bengals offense reached the Broncos eight-yard line, poorly concluding the first quarter with a two-yard loss on an Andrew Hawkins jet sweep. Andy Dalton had the football knocked down at the line of scrimmage on second down, setting up a third and ten with 14:57 remaining in the second quarter.

Initially the collision with Bannan caused Kevin Zeitler to give ground, perhaps forcing Dalton to "oh crap" his way out of the pocket. Zeitler had quickly regained his base; starting center Trevor Robinson seeing that Clint Boling had things under control, stepped out to help Zeitler as well.

Yet Dalton bailed. Now it's not so much that the quarterback felt the pressure, compiling with an internal instinct to survive. It's that once he decides to scramble, chances for any attempted pass (under composure we might add) is basically negligible.

Now Denver's first quarterback sack of the afternoon was at the line of scrimmage, meaning there was no yardage lost. We even contend the point of calling it a sack at all because Dalton had already declared himself as a runner by that stage. Cincinnati kicks the field goal.

Fast forward Cincinnati's following possession, with 9:41 remaining in the second quarter at their own 40-yard line with second and 14 (Armon Binns called for an offensive hold earlier).

Derek Wolfe pounded the B Gap between Kevin Zeitler and Andre Smith while Von Miller, lined-up outside of Wolfe's left shoulder, loops around. Zeitler recognized this, breaking off the block with Smith and engaging with Miller.

Now the sack will be attributed to Zeitler and that's not entirely fair. As Zeitler engaged with Miller, Mitch Unrein departs from his initial spot to Trevor Robinson's left, draws back and fills the gap that Miller penetrated. 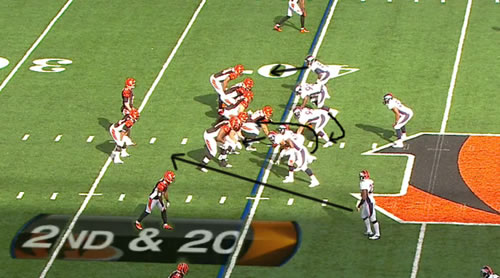 Call it an assisted non-sack for Unrein, who aggressively knocked Zeitler sideways while already engaged with Miller.

Essentially it boils down to Denver calling a defensive pass rush that saturated that side of the offensive line; there were more rushers than blockers.

Denver's third sack of the afternoon was a little more straight up. With 1:45 remaining in the second quarter, the Bengals have first and ten at their own 23-yard line. Miller, on the outside, powers Smith off-balance and sheds the block to sack Dalton, who had already began shifting up in the pocket looking for an escape route for a limited three-yard loss.

The impact was also minimal, with Dalton completing an 18-yard pass to Andrew Hawkins on third and 13 to sustain a drive that would eventually led to a missed Mike Nugent field goal.

Much of the same for Von Miller's third sack Sunday afternoon around the two minute mark in the third quarter; except the power move on Andre Smith was far more pronounced.

Smith tried recovering, but Miller had already gained inside position to power his way to Dalton. And in fairness to Smith, if it wasn't Miller, it was Dumervil's power rush on Andrew Whitworth.

Moving the football downfield, down by 11 points with over one minute remaining in the game, Dalton takes the shotgun snap from Denver's 17-yard line.

This time it was Elvis Dumervil that owned Smith. Using his speed, Dumervil took a wide angle, suddenly stopping and cutting upfield. Due to his momentum, Smith was unable to break as quickly, instead spinning around in the hopes of colliding with Dumervil before the sack. 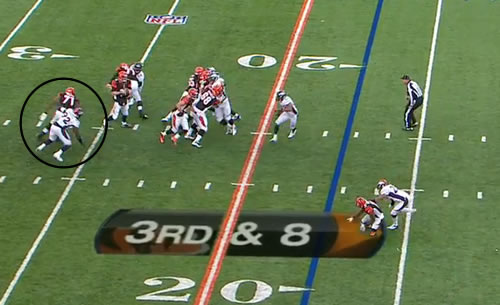 Andre Smith had his worst afternoon of the season, if not as a professional. Von Miller generated two sacks against him and Elvis Dumervil had one, totally three sacks allowed during Cincinnati's loss.