The Cincinnati Bengals are blacked out this weekend, meaning you'll have to find other ways to watch it. Unless you live outside of the region, then you're golden.

Share All sharing options for: Bengals And Giants National Television Coverage And Scheduled Games In Cincinnati

It would be an unrealistic fantasy to believe that industrious Bengals fans won't find a way to watch Cincinnati this weekend. Some undoubtedly will go to the game whereas others strap on their Elmer Fudd cap hunting an internet website that hosts international broadcast streams (most likely already in the favorites/bookmarks menu).

But then there are some in Cincinnati that would normally watch the Bengals on television. Yet some are unaware how to find the game, or feel comfortable about trafficking websites that a cautious mind would feel overwhelmed with the threat of infinite viruses (if you actively keep your system updated and protected, you never have anything to worry about... but take charge of your computer's defenses).

Now if you have the sports tier for Time Warner, or whatever tier through other companies, you have the Red Zone option where you will see scoring plays and perhaps a few moments of live action. But if you're interested in what games are being shown in Cincinnati because 1) you rather watch a full game or 2) you don't have the Red Zone channel, then we have your answers.

CBS, airing one game this week because FOX has the double-header, will show the Oakland Raiders at Baltimore Ravens with a 1 PM kickoff. Onto the more awesome part. Not only will the NFL punish markets for not selling out a game by blacking out the local team, they're more than willing to axe football entirely because as of this writing, FOX is not replacing that game with another. Dayton and Lexington on the other hand, also within the blackout range, will actually get a replacement with the Atlanta Falcons and New Orleans Saints.

Cincinnati will get the FOX late afternoon game between the Dallas Cowboys and Philadelphia Eagles.

Now if you're outside of the blacked out zone, there's a good shot you'll see the game. 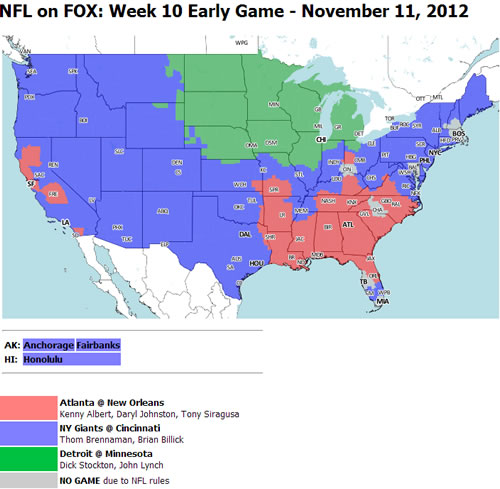 Also keep in mind that we run a Game Day Stream that's constantly updated with results during the game.

You can find what games are being shown in your area at the 506.