Reggie Nelson's hit on Dez Bryant in the third quarter, which forced an incomplete pass, was ruled a personal foul. A foul that no one agrees with.

Share All sharing options for: Marvin Lewis on Reggie Nelson Hit: Thought It Was Picture Perfect

Sunday offered its fair share of controversy between the Bengals and Cowboys. But none more than Reggie Nelson's hit on Dez Bryant. With 5:29 remaining in the third quarter, Tony Romo launched the third and 20 pass down the right sidelines where Bryant's vertical route had reached Cincinnati's 40-yard line.

Nelson, covering the deep half of the field in Cover Two, drilled Bryant using his right shoulder about chest-high as the receiver is making the reception. The football is knocked out of Bryant's hands and even if he makes the catch, he couldn't get two feet inbounds due to the impact of the hit. 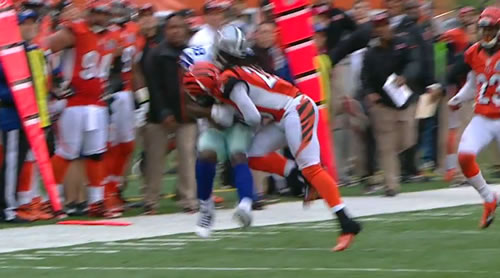 During the broadcast while reviewing the replays, Brian Billick disagreed with the call, saying "I don't know how you hit 'em. You almost have to let them catch the ball."

Mike Pereira
@MikePereira
In CIN/DAL game. Shoulder to the chest. That's a perfect hit on Bryant. Clearly not a foul.
Reply · Retweet · Favorite
18 hours ago via TweetDeck · powered by @socialditto

The Side Judge, the official with the best view and position on the hit (this one)... 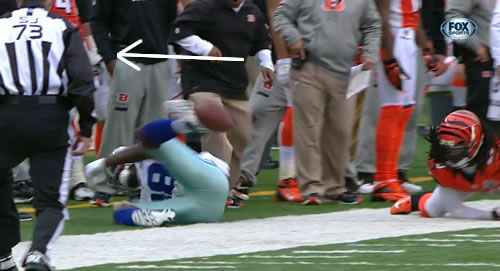 ...wasn't even the official that threw the flag. Standing 15-20 yards away from the play, he signaled incomplete pass and that was that. No flag.

It was the Back Judge that threw the flag.

While trying to deflect the question with obvious frustration from the loss and a moving-forward attitude, Bengals head coach Marvin Lewis admitted after the game that the hit was picture perfect.

"That’s where we are with those kinds of plays. Those things happen all the time and you’ve got to overcome them as a football team, and we are good enough to."

"That’s what (defensive coordinator Mike) Zimmer teaches us – to go low and not aim for anybody’s head," Nelson said. "I think I did a good job of taking that teaching."

Ironically with a twist of karma, it was Reggie Nelson that put an end to Dallas' possession anyway. On third and ten from the Dallas 47-yard line, the Bengals added more pass rushers than blockers with Reggie Nelson coming off the left edge. Knowing that he doesn't have any blockers to take on Nelson, Tony Romo takes the sack and the Cowboys punt.