The Bengals were riding high heading into last week’s match with the Cowboys because a four-game win streak and suddenly finding a way to run the ball effectively. Many pointed to the only roster change; undrafted rookie Trevor Robinson replacing Jeff Faine at center. The rookie from Notre Dame stepped in like a seasoned veteran and provided some athleticism and cohesion in the interior of the offensive line. Kyle Cook was recovering from a preseason ankle injury and was eventually going reclaim his starting job, but how do you go about it? Robinson wasn’t hurting the team and Cook’s recovery status had questions of its own. Marvin Lewis answered that question by splitting the reps on Sunday with 30-snaps apiece. I re-watched and graded every snap of each center to see if we could find trends and possibly a direction to point a finger for Sunday’s lack of offense.

*No Contest: Didn't need to block anybody or pass was too quick.

What Does This Show Us?

Looking at the numbers, they're very similar. Both Cook and Robinson were outmatched on only one pass play and each had six-winning blocks. Kyle Cook was called for a false start and a bogus holding call and Trevor Robinson got away with two holds that weren't called; one caused the Cowboys Defensive Coordinator to run on the field. I found it interesting that Kyle Cook was asked to work in tandem with his guards in the run game more than Robinson was. Cook looked good doing it and getting to the 2nd level on many zone runs. Because neither player really stood out when I graded each play, I decided to chart the success of the Bengals offensive while each player was in the game.

The Picture Gets Clearer. Or Does it?

I know what you're thinking - It seemed like when Kyle Cook was in the game, the Bengals offense wasn't hitting on all cylinders. That's what I thought when I watched it live also. In reality, the offense was just fine, if not better with Kyle Cook at center. Cincinnati averaged 1.7 yards more per run and completed 3.8 percent more of their passes with the veteran with their veteran center. Cook's unit did allow one more sack, but it could be attributed to Dalton more than the offensive line. Now, you could add that Marvin Jones' long reverse to Trevor Robinson's stats because he was on the field, but I was more looking at the traditional running game. It's also worth noting that all of Brian Leonard's carries came when Kyle Cook was in the game.

This game comes down to winning, losing and scoring points. Trevor Robinson's offense scored 16 of the team's 19 points on Sunday. The offense wasn't forced to punt or turn the ball over during Robinson's stint whereas Kyle Cook's offense punted twice and will be charged with Dalton's big interception.

When the numbers end up being close without providing a clear-cut winner, you must trust what your eyes tell you. I see Robinson as an athletic upgrade; he's smoother, quicker, and more flexible than Cook. What I like about Cook is his toughness, fight and veteran tricks that help him win. There were a few plays where the veteran center is the last guy wrestling and making sure his defender isn't getting off the ground. To my surprise, Robinson seemed more aware of his surroundings and the game seemed slower to him; he looks like a veteran. How rusty was Cook? A few of his struggles could just be him adjusting to game-speed again. I think we'll need another week to know for sure.

Breaking Down a Bengals Play

I read through the comments here on Cincy Jungle and noticed a couple people giving Kyle Cook a sack on a particular fourth quarter play. I went back to look again because I didn't initially think that was Cook's fault. Here's what happened: 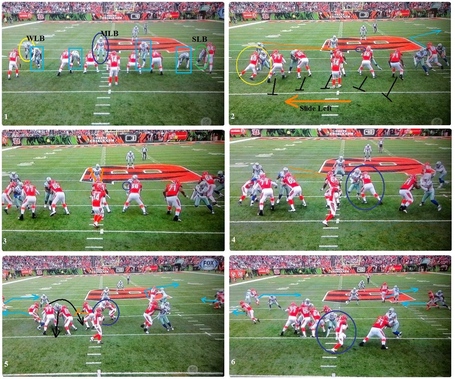 The Bengals come out with three-wide with the running back and tight end split out, leaving an empty backfield. Dallas counters with a 1-4-6 Nickel package (1-DL, 4-LBs, 6-DBs), but that’s meant to confuse Cincinnati. Take a look at picture No.1 again and you’ll see it’s basically a 4-3 defense after you identify the "Mike" (Middle LB). I put a (light blue) box around which defenders would be considered lineman/rushers. Then I circled each LB to show how the offense would designate them. Once that’s finished, the offense can go through with their protection. On this play, its "2 Jet" protection, a staple of the west coast offense. This gives the Bengals six-blockers (Including Brian Leonard) and their assignment is to block/slide towards the Weak-side LB (Circled in Yellow).

After the snap, Cook raises his head and looks/checks the WLB; he seems to be in coverage. Cook then snaps his head to the MLB; coverage again. With his responsibilities to block left, he checks that side again. This time, you’ll see in picture No.5, DeMarcus Ware is starting to loop behind the DT with the intentions of finding an open gap between Boling and Cook.

By this time, Kevin Zeitler is getting his lunch money taken on a very nice swim move by Anthony Spencer and it’s all over for Andy Dalton. It looks like the receivers were just starting to come free, but they needed another second of protection. Kyle Cook could’ve played it better by keeping that right arm extended/feeling for Zeitler, but in the end, the rookie RG needs to play that much better. Look how flat-footed he is in picture No.2 and how he’s lunging in picture No.4; you won’t win many one-on-one battles like that.